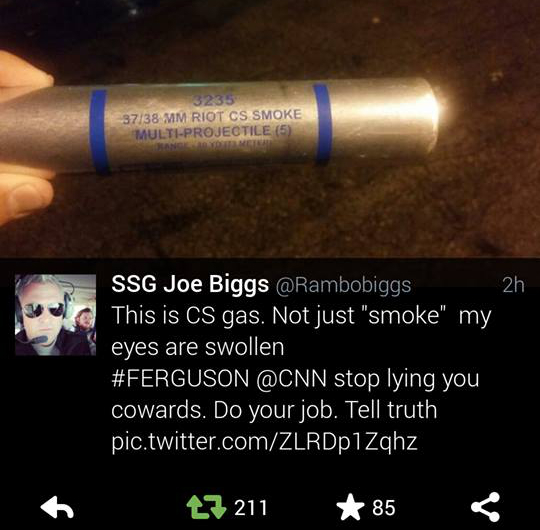 As the midnight deadline approached, media outlets on scene were corralled into a small parking lot several blocks from protesters and threatened with arrest if they left the area.

Hearing chanting demonstrators in the distance, Infowars reporters broke out the back end of the media pen and made their way down the street.

“The police were trying to limit what we could see and gave disinformation to the media who stayed,” Infowars reporter Joe Biggs said. “We wanted to show what was happening on both sides so we snuck down the back of several buildings and filmed the standoff.”

Shortly after reaching the protesters, riot police in armored military vehicles began raining down tear gas on all who defied the state-imposed curfew.

Meanwhile, journalists in the cordoned off press pen, beholden to police talking points, repeated false claims about the use of tear gas. CNN, who temporarily reported on the use of tear gas, suddenly changed their story after police claimed no tear gas was used.

Incredibly, Infowars reporters Joe Biggs and Jakari Jackson found themselves in the sights of a sniper as they attempted to document the deteriorating situation.

“We tried to head back in the direction of our car when they started targeting us with sniper rifles,” Biggs said. “I had a dot on my chest so I threw my hands up and screamed ‘media!'”

Loud bangs in the distance were quickly confirmed to be live gun shots according to Missouri State Highway Patrol Capt. Ron Johnson, who said one protester was shot after a police vehicle was fired upon. Protesters on scene refuted the claim, saying an officer wildly opened fire at demonstrators.

Missouri Gov. Jay Nixon remained silent as the scene fell into chaos despite promising not to use military vehicles and tear gas the day before.

Sunday marks yet another day that innocent protesters and reporters were targeted by police action.

Exclusive Infowars video from the scene as well as an interview with the targeted news crew only served to erode the police’s poor attempt to cover up the egregious First Amendment violation.

Despite the escalating crackdown, protesters remain vigilant in their resolve to protect their community from looters and overbearing police.