Infowars broke the news years ago that communist China’s “social score” model was coming, and now the Drudge Report has revealed that Facebook is implementing it for its users.

Over the past several years, Infowars also revealed Facebook’s tightening relationship with China, especially as Mark Zuckerberg met with Chinese censors, and the Drudge Report is highlighting that strong bond as well.

“Facebook is rating users based on how ‘trustworthy’ it thinks they are,” reads an article by The Sun that’s top linked on Drudge. “Users receive a score on a scale from zero to one that determines if they have a good or bad reputation – but it’s completely hidden.”

The second top link on Drudge is to an article with the headline “China assigns every citizen a ‘social credit score’ to identify who is and isn’t trustworthy,’ which was published in April.

Check out this Infowars article from 2015:

“China’s largest social networks have partnered with the country’s Communist government to create a credit score system that will measure how obedient its citizens are, a chilling prospect that could one day arrive in America if social justice warriors get their way,” reported Paul Joseph Watson in an article that’s now coming true.

The goal of the program, known as Sesame Credit, is to create a docile, compliant citizenry by assigning “social scores” to citizens which ultimately creates self-imposed social control.

And, as Infowars reported in 2014, Zuckerberg met with Lu Wei, the czar of China’s draconian Internet censorship system. 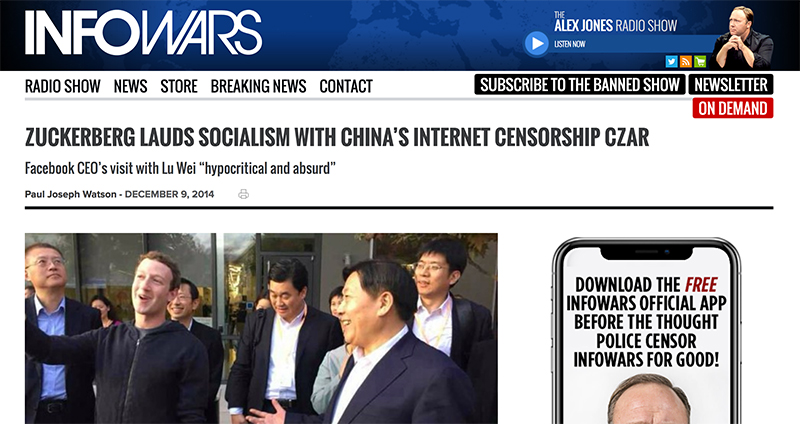 “During the meeting, Wei discovered a book written by Chinese President Xi Jinping called ‘The Governance of China’ sitting on Zuckerberg’s office desk, leading Zuckerberg to comment, ‘I’ve bought this book for my co-workers. I want them to understand socialism with Chinese characteristics,'” reported Paul Joseph Watson.

This is why Big Tech wants Infowars banned, and why the world needs to listen to us.

This is an emergency report – get this out to everyone, even if by word of mouth!