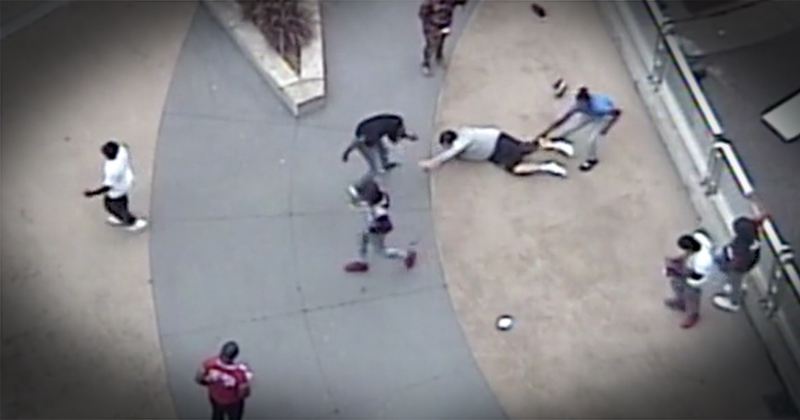 In the first video, an elderly white man is seen trying to walk past a crowded area full of young black people when he’s stopped and shoved by multiple suspects.

One of the suspects appears to reach into the man’s pocket and take something before running off with his loot.

In the second video, another white man is standing on the sidewalk surrounded by a large group of young black men who begin to take his cell phone out of his hands.

The victim struggles to hold on but is hit with a barrage of punches, prompting him to tackle the attacker in self-defense.

Once on the ground, the attacker’s friends swarm the victim, kicking and punching until he’s knocked unconscious.

An assailant rummages through the immobile man’s pockets and walks away with his stolen goods, leaving the victim lying on the floor.

Witnesses help the man back to his feet and police arrive before the surveillance footage ends.

In the final clip, which is the most disturbing, a white male sits on a ledge among the group of black youths when, out-of-nowhere, a group member reaches for his cell phone.

The man stands up and pushes the suspect away and is immediately struck in the side of the face with a sucker-punch thrown by another member of the group.

The victim is then thrown to the ground and punched again as multiple muggers leap into the air and stomp on his body.

Next, in a queer move, the group begins stripping the man’s shoes, pants and underwear.

The robbery victim is then punched and kicked another 10-20 times, hit with two potted plants and run over with a bicycle all while being whipped with a belt.

Law enforcement said the group was targeting intoxicated prey, but never mentioned the obvious fact that every victim was white.

If a group of white youths was randomly attacking black men it would be national news, and it should, but for some reason, these attacks are not being investigated as hate crimes.

Police say the group is a loosely organized gang and that all three attacks took place between Aug. 3 and Sept. 6.

Minneapolis police spokesperson John Elder said there were 47 robberies in downtown Minneapolis in a three-week period during August and that a cell phone was the prize target every time.

In total, the area has seen a 46% increase in robberies in the last year.

The hate crime committed by a black transgender appears to be ignored by the MSM.

Owen Shroyer exposes the double standards of the media whose ultimate agenda is to keep the races separated.