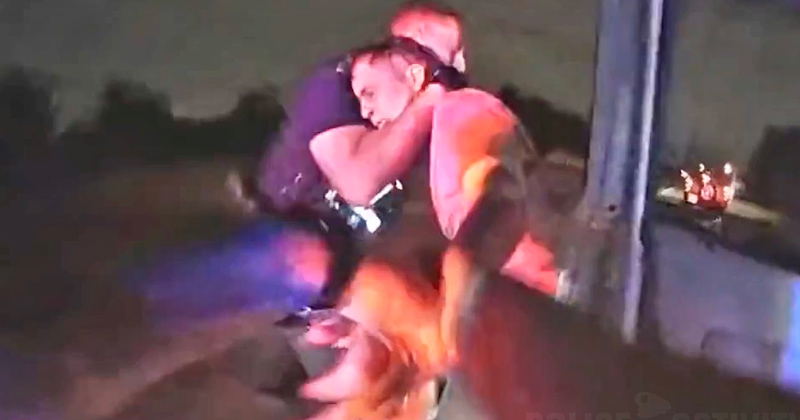 Body and dash cam footage released Monday show the moments that led to the shooting of two Oklahoma police officers during a traffic stop.

In videos of the June 24 incident provided by the Tulsa Police Department, Officer Aurash Zarkeshan and Sgt. Craig Johnson are seen attempting to detain David Anthony Ware, 32, who was pulled over after driving recklessly in front of the officer.

The video shows Ware refuse to exit the vehicle when ordered numerous times, and then phone his friend to come help him as he insists he’s having his rights violated over a minor infraction.

Meanwhile, Sgt. Johnson gets ready to shoot a taser at Ware, continuing to shout orders for him to exit the vehicle.

Ware is subsequently tasered, but holds on to his steering wheel as the other officer tries to pull him out of the vehicle.

The sergeant next deploys pepper spray as Ware continues to resist, moving back inside his car while shouting, “I don’t want to go to jail!” as he’s ordered to get on the ground.

Eventually, officers pull Ware out, but during the violent struggle he produces a pistol he had stowed beneath his driver’s seat and fires multiple rounds at both officers, killing Johnson and injuring Zarkeshan.

Ware then runs towards his friend’s truck, whom he called amid the traffic stop.

Ware’s lawyer had been trying to get the footage released since July after claiming the district attorney inaccurately described him standing over officer Johnson as he fired three more shots.

At a news conference Monday, Tulsa police chief Wendell Franklin took on a somber tone when discussing the tapes he says show a police execution.

More on Chief Franklin’s comments at the news conference from TulsaWorld.com, where he asked the public not to view the videos.

“Some have tried to paint a picture of deception, that this, what we have told you, is deceptive. In no way is it deceptive,” Franklin said. But he acknowledged that some information released in June about the behavior of Ware — whose name Franklin did not say aloud — “may not be totally accurate.”

Despite this, Franklin said, “realistically, the discrepancies don’t matter” to him because “two officers were gunned down.”

…Franklin said: “If I were the public, I would turn the television off. I would tune out. Let this video play out in court, and let the judge and jurors be the ones that must view it.”

Prosecutors are reportedly seeking the death penalty against Ware. They also charged Matthew Hall, the person Ware phoned, with being an accessory after the fact claiming he helped Ware evade arrest following the shooting.