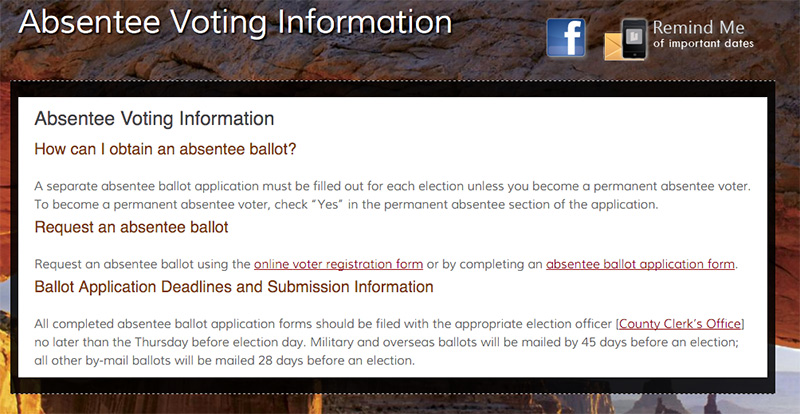 The Ted Cruz campaign reportedly encouraged absentee voters to slip in their ballots without proper documentation.

A Utah voter received the following e-mail apparently from the Cruz campaign:

If an absentee voter follows these instructions, he would risk violating Utah voting laws which state that absentee voters must submit an application form the Thursday before the primary.

Voters cannot simply decide to vote “absentee” the day before the election and print off a ballot without having filed an application beforehand, which these instructions imply.

“All completed absentee ballot application forms should be filed with the appropriate election officer [County Clerk’s Office] no later than the Thursday before election day,” Vote.utah.gov says in no uncertain terms. “Military and overseas ballots will be mailed by 45 days before an election; all other by-mail ballots will be mailed 28 days before an election.”

Proper instructions on how to “vote absentee” legally would have mentioned the application form and would have been sent out long before the primary.

The e-mailed instructions, on the other hand, seem to prey on the ignorance of Utah election officials, many of whom are inexperienced volunteers.

The voter who received the e-mail and posted it at Godlike Productions said the e-mail encouraged “total fraud.”

“First, I served several years in a leadership role in the Utah Republican Party, so I know a few things about the process,” he said. “There are only two things that will happen if people show up with ballots like this:

1) It will slow down voting while volunteers try to figure out wtf to do with these ballots. Hopefully, if people are doing their jobs, these will be thrown out.

2) The more likely scenario is, in the chaos, volunteers will just take the ballot and submit it with the rest of the ballots.”

“If you do this, you are participating in voter fraud,” he warned.

The Cruz campaign has a history of unethical behavior, such as misleading Iowa voters into thinking Ben Carson had dropped out of the race so they would vote for Cruz.