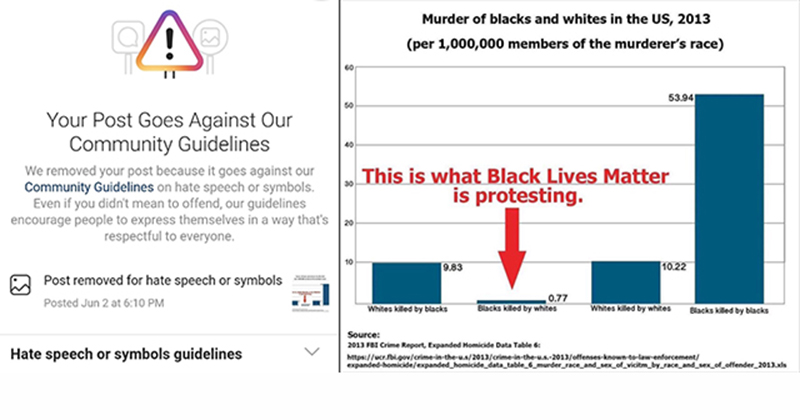 “We are getting to the point where narratives are more important than truth,” Schaffer said. “And the truth when inconvenient makes you a hateful person. This is 1984.”

Posted with the necessary citations

And the truth when inconvenient makes you a hateful person

This is the “hate graph” he posted, which is based off FBI crime stats from 2013: It makes sense that Instagram would want it censored as it debunks the media’s entire false victimization narrative. While Instagram has apparently deemed FBI crime stats off limits, Fox News and the Wall Street Journal are now running them on their front pages.

Nationally, efforts to defund the police have been broadly unpopular, with only about 20 percent of Americans favoring reductions in police forces. Citing publicly available data, commentators have asserted that the very idea of systemic racism by police is questionable.

“In 2018, the latest year for which such data have been published, African-Americans made up 53% of known homicide offenders in the U.S. and commit about 60% of robberies, though they are 13% of the population,” Heather Mac Donald wrote in The Wall Street Journal this week.

“In 2018 there were 7,407 black homicide victims,” she went on. “Assuming a comparable number of victims last year, those nine unarmed black victims of police shootings represent 0.1% of all African-Americans killed in 2019. By contrast, a police officer is 18½ times more likely to be killed by a black male than an unarmed black male is to be killed by a police officer.”

Mac Donald continued: “A 2015 Justice Department analysis of the Philadelphia Police Department found that white police officers were less likely than black or Hispanic officers to shoot unarmed black suspects. Research by Harvard economist Roland G. Fryer Jr. also found no evidence of racial discrimination in shootings. Any evidence to the contrary fails to take into account crime rates and civilian behavior before and during interactions with police.”

Fryer’s work has also determined that when police pull out of communities, black deaths tend to increase.

While Instagram is censoring FBI crime stats as “hate speech,” on their official account they’re still promoting a “disabled trans model” named Aaron Philip who last year explicitly called for the “killing” of all “transphobes.”