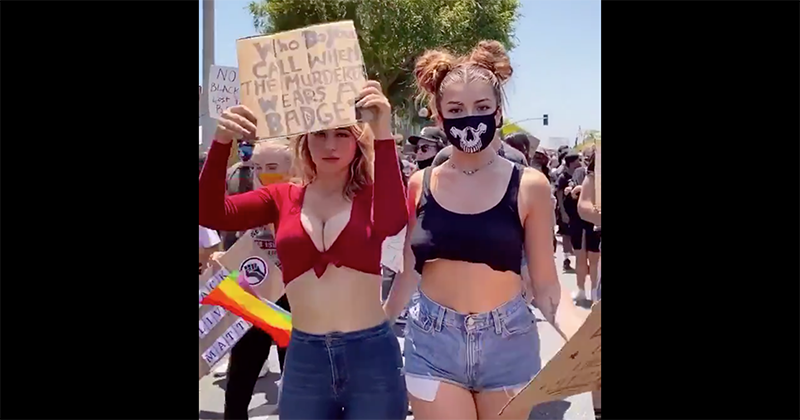 As it does with everything nowadays, social media played a critical role in rousing the US, and then the world (or at least parts of wealthy western Europe), to stand up against police brutality following the murder of George Floyd while being taken into custody.

More recently, the incessant virtue signaling by Hollywood actors, celebrities and just normal people has, at times, verged on parody, like when – earlier this week – hundreds of thousands of users posted black squares on their screens in an effort to “amplify black voices”. Minutes later, they deleted the squares after someone else said it was tantamount to a “blackout” on minority voices.

But without a doubt the most infuriating social media phenomenon is the IG “influencer” crowd treating the protests and riots, as well as their aftermath, like it was Coachella, or some kind of massive block party, posting for highly curated photos, often obstructing the paths of others while they scream at their boyfriends to make sure they get “the perfect pic”.

On Friday, another video of an influencer holding a cardboard sign went viral.

“IG influencer” goes to “protest” for an aesthetic pic.twitter.com/o3Xhyjs3WW

She just needed to get that “protest aesthetic”.

In another example, a protester calls for an “influencer” to be cancelled for using the “blackout tuesday” protests as she strutted out her “assets”.

Kendall Jenner is probably persona non grata at any BLM event since that widely panned Pepsi commercial where she ended police brutality with a can of Pepsi. But that didn’t stop some deranged stan from photoshopping the pic below, which sent several rose emojis into a white-hot rage.

Meanwhile, how dare this young lady try to organize a protest without the approval of “BLM”.

This is the Non-Black ig “influencer” who appropriates Black culture and also organized the protest in Van Nuys tomorrow morning. https://t.co/KvPtRbsq81 pic.twitter.com/k35JxGeo5a

Leftists now claiming “white women” have ruined their movement. Sounds a little misogynistic if you ask us.

Let’s not forget this one from earlier this week.

So so gross for any “influencer” to try and capitalise on the BLM protests. Says so much about someone’s character https://t.co/xXj5zihaLH

Can’t say we disagree with this one.

This is worse than the looting

The movement to outlaw selfies at protests has begun.

Can influencer pls just go to a protest and not take a picture of themselve? Can’t they just show how the protests are actually peaceful and how cops are starting the violence? Cmon @NikitaDragun pic.twitter.com/3cS4hcEUfb

Before we go: a heartfelt plea.

If they really want to pitch in, one of them should make a makeup tutorial about how to cover rubber-bullet and tear gas-related injuries.