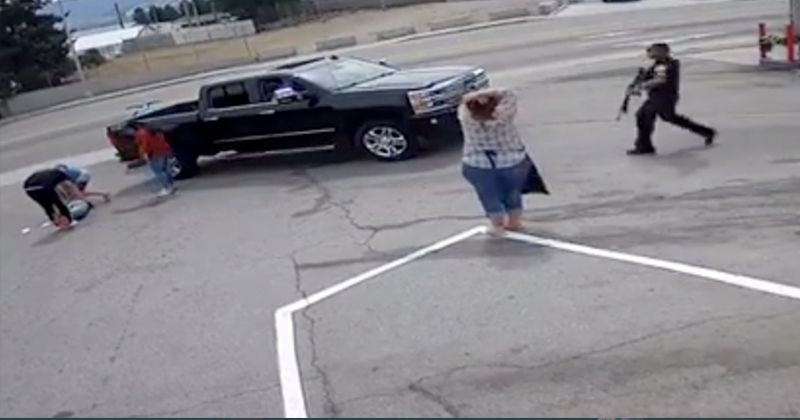 Surveillance video out of Wenatchee, Washington shows a man assault a female gas station clerk, throwing a bottle at her and dragging her by the hair before an armed citizen pulls up and draws his gun on the attacker.

The incident took place Thursday, August 8 at a 76 gas station in the middle of the afternoon.

Footage shows the clerk talking with the suspect, who snatched an item out of her hand, began throwing items at her and dragged her by the hair.

The clerk later told police the assailant appeared to be intoxicated and that he was angry because she refused to sell him alcohol.

Jesse Altizer, the citizen who came to the rescue, pulled into the parking lot of the store accompanied by his two children.

Upon entering the parking lot, Altizer saw the attacker hitting the store clerk, and when the suspect approached Altizer’s vehicle, he sprang into action.

Altizer ran around the back of his truck with his handgun drawn and forced the assailant to the ground where he waited until police arrived three minutes later.

“We can’t do our work without the help of citizens like him,” said Capt. Edgar Reinfeld of the Wenatchee Police Department.