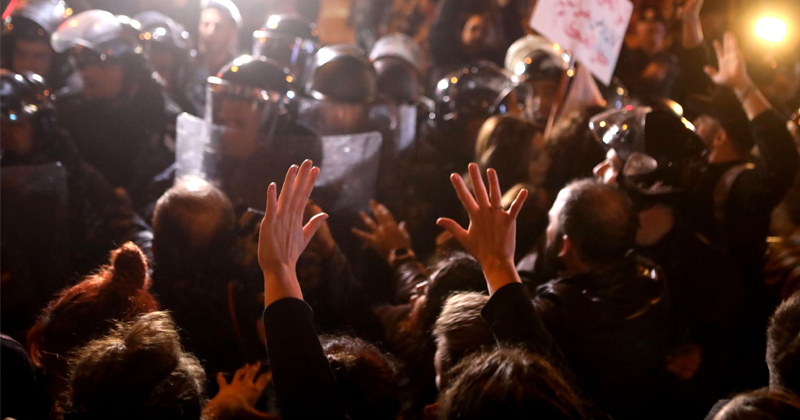 Diplomats met behind closed doors in Paris on Wednesday to consider measures to help Lebanon as it grapples with ongoing political turmoil and its worst economic crisis in decades.

The international group, co-chaired by France and the United Nations, is weighing conditions for providing financial aid to Lebanon. Lebanese businesses and households are growing increasingly desperate as cash supplies there have dwindled.

“In order to halt the sharp deterioration in the economy … there is an urgent need for the adoption of a substantial, credible and comprehensive policy package of economic reforms to restore fiscal balance and financial stability,” the international support group said in a final communiqué after a meeting in Paris on Wednesday.

For two months, protests have decried government mismanagement and the current political system. But even as the financial crisis deepens, protesters have denounced the Paris meeting and promised to condemn any international financial assistance to a government they see as corrupt and illegitimate.

Prime Minister Saad Hariri resigned October 29, but he has stayed on as caretaker prime minister since politicians have been unable to form a new government. Protesters want to see a non-sectarian, technocratic government – and they want all traces of the old regime, including Hariri, out of office.

France and the United States have made clear they support a new government in Lebanon.

The US has escalated its sanctions on the Iran-backed Lebanese Hezbollah group, which dominates the national unity government that Hariri headed.

French Foreign Minister Jean-Yves Le Drian said at a press conference ahead of the Paris meeting that Lebanese authorities must “take into account the call of the street”. He urged Lebanese authorities to “form a government rapidly because any delay will aggravate the situation”.

Meanwhile, dozens of protesters in Beirut and Paris rallied Wednesday to call on the leaders meeting in France not to give financial assistance until a new government comes together.

“This authority … no longer represents the Lebanese,” said a protester in Beirut reading a letter to be delivered to the French ambassador. Calling the current government corrupt, the protester said: “We don’t want [that aid] to go to waste.”

“The only possible criteria (for aid) is the effectiveness of the government in implementing the reforms awaited by the population,” said Le Drian after the meeting. “This is the only way that the participants around this table and beyond can mobilize to give Lebanon the support it needs.”

‘We Don’t Have Anything to Lose’

Hundreds of Lebanese business owners gathered in central Beirut protesting the delay in forming a new government and threatening a collective tax strike. Organizers said most private businesses have already been unable to pay taxes and are still getting slapped with penalties.

“What we are asking for is to cancel the penalties. We can’t afford paying,” said Samir Saliba, a business owner.

Saliba said a new campaign is aimed at educating the private sector about their rights and advocate for a blanket tax strike: “People are fed up. We don’t have anything to lose anymore.”

In the last weeks, hundreds of people have been laid off or are receiving reduced salaries, while many businesses have had to shut down.