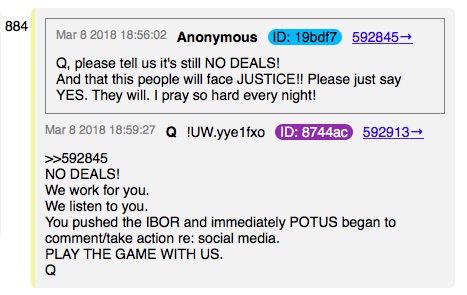 WASHINGTON, D.C. – AT&T’s call for Congress to pass an “Internet Bill of Rights,” (IBOR) has gained momentum since Infowars.com broke the news Jan. 26.

Initially, the concept met resistance among those suspicious that AT&T is a corporate giant that may have a profit or other undisclosed agenda behind proposing and advocating the concept.

This resistance largely melted away after the intelligence agent known as QAnon began posting on the deep web bulletin board “8chan” that the concept had strong support from President Trump, resulting from his displeasure and concern that Internet giant edge providers, including Google/YouTube, Twitter, and Facebook, have intensified efforts to censor conservatives and libertarians off social media channels on the Internet.

In a March 8th post, QAnon appeared to give a nod to Infowars.com for publishing the AT&T suggestion, commenting: “You pushed the IBOR and immediately POTUS began to comment/take action re: social media.” 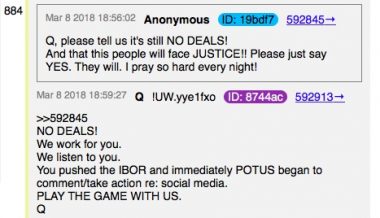 In two additional posts the following day, QAnon followed up, leaving no doubt that the giant Internet edge providers will be “100 percent regulated,” with President Trump having reached a policy decision that First Amendment free speech rights must be honored by social media on the Internet, even if that result causes some platforms to collapse, with shareholders divesting stock in what could constitute a historic sell-off. 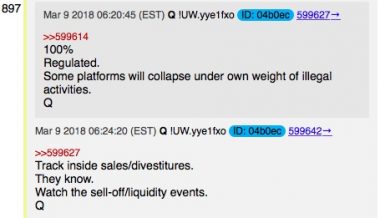 In a post on Wednesday, March 7, QAnon made clear that IBOR has “nothing to do with AT&T,” insisting that President Trump’s support comes from his conclusion the Internet giant edge providers “must be regulated to prevent censorship and narrative push.”