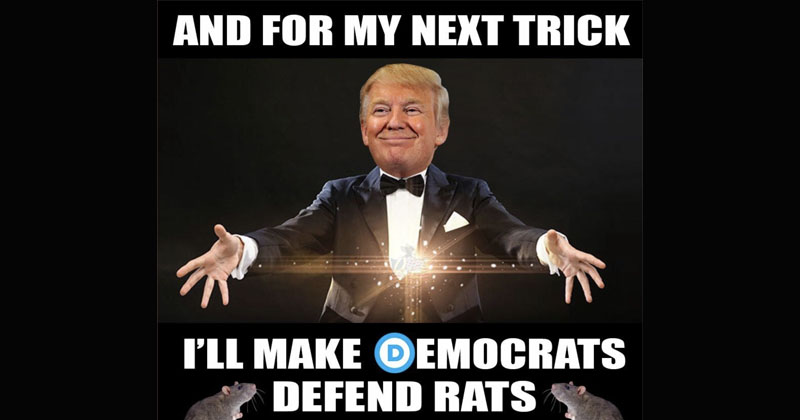 Social media became infested with memes after President Trump called out the rat-infested conditions of some areas of Baltimore under Democrat leadership.

Democrats have tried to spin Trump’s remarks as racist, but most people realize there’s nothing racist about pointing out filthy conditions of a place that’s been under Democrat control for decades.

That feeling when the Baltimore Mayor says she can smell the rats. pic.twitter.com/CH84NmYGWG

Just watched a cat lose a fight with a rat. #Baltimore pic.twitter.com/CciG8PAOvH

Dems: these rats are a problem

Trump: these rats are a problem

I try to keep it intellectual around here but this is hilarious (and true). pic.twitter.com/RZe3z03gJt

Baltimore rats taking over the news cycle like pic.twitter.com/B2mUlj5qxg

If Trump hates it Dems embrace it. pic.twitter.com/1vJ7CKhsLS

When you wake up and still live in a Dem-run city. pic.twitter.com/4dKbFBhQ4U

Dem organizers sign up thousands of rats for anti-Trump protest march in #Baltimore this Saturday. pic.twitter.com/dRXG8nIVTm

RELATED: TRUMP IS RIGHT ABOUT BALTIMORE

Democrat controlled cities with crumbling infrastructures want to expand their campaign of desolation while removing any trace of reference to God or true moral authority.