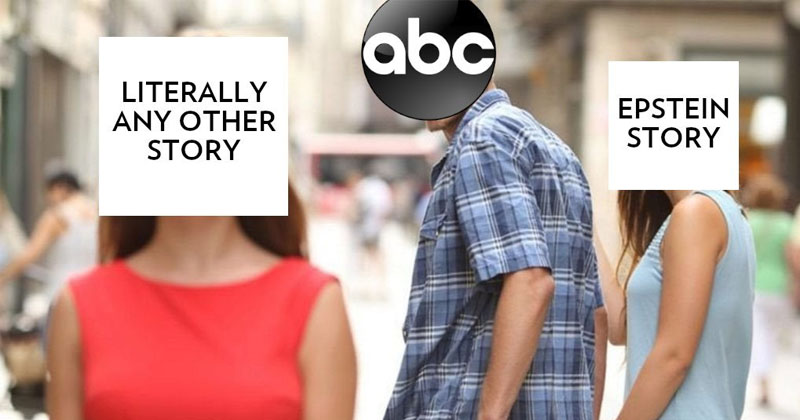 #EpsteinCoverUp began trending on social media shortly after, with users launching a deluge of dank memes mocking the network for their double standard of news coverage, such as pushing the fake news that Supreme Court Justice Brett Kavanaugh is a serial rapist, rather than pursuing REAL news of Epstein backed by numerous facts and documents.

Every day they sat on the #EpsteinEvidence another victim was allowed to suffer.

Can't wait to see what celebrity drama or false flag they come up with to distract us from the #EpsteinCoverup. pic.twitter.com/APbtW60JNq

When you curbed your Epstein story. pic.twitter.com/03oQYYJHvx

WHAT IS GOING ON AT ABC NEWS pic.twitter.com/L0WoLOzeZb

I mean, @abcnews editorial standards are impeccable so this is all perfectly understandable, right? pic.twitter.com/FhxNnmI0ZV

I'm sure whatever the reason for suppressing information, the media and big tech have our best interests at heart. #EpsteinCoverup pic.twitter.com/WHe5RtWdHg

The media continues to be utter garbage.

NBC and ABC had witnesses willing to state, on the record, re:Epstein crimes, and that didn't meet their 'high journalistic standards'.

However, the second a conservative is appointed to SCOTUS?

Today’s news in one GIF:

(If this does not make sense to you you’re watching, reading and listening to the wrong people — you’re being lied to. This is the biggest story in the country)#EpsteinCoverup pic.twitter.com/l7CPoSX2xo

WHO REMEMBERS THE 80s?
In the '80s, we had it all – our first Walkman, MTV, video games, our first computers, and the most unforgettable hits of all time. We enjoyed a wide range of styles – from rock to R&B, from slow ballads to dance – but somehow it all worked together. pic.twitter.com/StAbMA4I99

Ask me if I'm shocked that @ABC #ABC covered up for Clinton and Epstein. pic.twitter.com/jeKoPkxxNB

Yeah, because the government is protecting them. Otherwise we wouldn't need dumb internet memes to pierce the lies the media tells us about what happened. #Epsteindidntkillhimself pic.twitter.com/Fs2i8Lz4ud

The Clintons’ involvement with Epstein was already so widely known by the public that #ClintonBodyCount began trending on Twitter shortly after Epstein’s mysterious death in August.

Last week, New York City medical examiner Dr. Baden, who was hired by Epstein’s brother to observe the autopsy, claimed that the nature of the broken bones in Epstein’s neck indicated he didn’t commit suicide, but was murdered.

Alex Jones exposes the reason behind the murder of Jeffrey Epstein, after top pathologist, Dr. Michael Baden, revealed his findings that indicate Epstein was murdered.