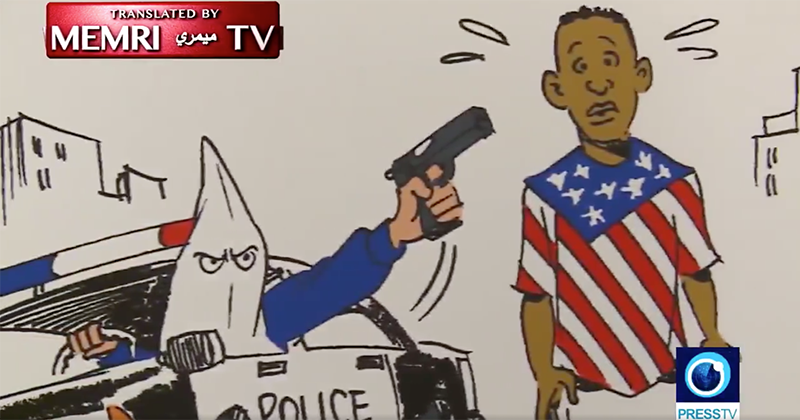 Iran, governed by one of the most racist regimes on Earth, has sponsored an ‘international art exhibition’ using the death of George Floyd to tar America as deeply racist society.

The exhibition, titled “I can’t breathe” includes ‘art’ that depicts US police as Nazis and Ku Klux Klan.

Footage of the exhibition was broadcast on Iranian state television, showing one painting with a Guillotine for “only colored” people, with the blade as an American flag:

Another piece features the star of David crushing the neck of a dove, which is in itself a racist sentiment:

While the collection features pieces from people with 27 different nationalities, it is clearly being hosted and promoted by Iran as anti-American propaganda.

The Iranian regime has basked in the unrest in America, with its ‘Supreme Leader’ and its Foreign Ministry bragging about how racist the US is on Twitter:

If you're dark-skinned walking in the US, you can't be sure you'll be alive in the next few minutes. #ICantBreathe #BlackLivesMatter pic.twitter.com/nwR8jeUPpg

To those of us who do: it is long overdue for the entire world to wage war against racism.

This coming from a country that viciously oppresses all minorities, sanctions brutally beating women if they dare to uncover their heads, and endorses the execution of people for their sexuality.

Another Exhibition in Iran pic.twitter.com/DUjstcrFNr

Today in Tehran, there was a protest in which entrepreneurs gathered in front of the Central Bank holding placards saying "Remove your knee off our throats, we can't breathe." You can find it here:https://t.co/cO7ktNXB4g

There is a reason an enemy state of the US is creating propaganda in support of BLM and antifa.

Imagine a cartoon of a gay man crushed by the knee of a mullah, I imagine all hell would break loose

As a woman who's forced to cover her head or be jailed walks by and only men are allowed to gather and speak. Throw any gays off the roof lately?

Should we stuff down their throats what the Islamic slave trade did to Black men?