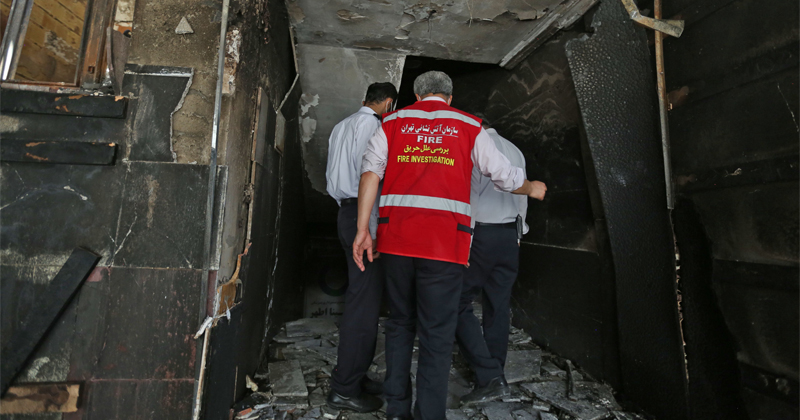 By our count it’s the sixth ‘mystery’ explosion in mere weeks. In the early morning hours of Tuesday two Iranians were killed and three injured in a blast at a factory south of Tehran, IRNA reported.

Like with other recent explosions and fires, including one at Iran’s underground nuclear development Natanz facility, official statements downplayed this latest blast as an accident. “Human error was the cause of the blast in a factory… Two people were killed and three others were injured,” said a local official.

“The explosion that was caused by some workers’ negligent handling of oxygen tanks…. was so powerful that the walls of a factory nearby were also totally destroyed,” he added.

What is a mystery, however, is the latest spate of “random” explosions and fires at remote Iranian countryside areas and industrial zones known for being weapons and nuclear development sites, as we previously detailed.

Israel was the culprit behind a fire that caused significant damage to an Iranian uranium enrichment facility, a Middle Eastern intelligence official has claimed.

The unnamed source told The New York Times that a powerful bomb caused the explosion at the Natanz nuclear facility last week.

Declared an accident by Iranian officials, the blast led to significant damage to the facility and could slow the production of centrifuges used to enrich uranium, according to the country’s atomic energy spokesperson.

Several mysterious fires and explosions have broken out at sites in Iran in recent weeks, including explosions at a weapons depot and medical facility, along with a fire at a power station.

The incidents are now coming with such frequency that the question of foreign sabotage is impossible to ignore, also considering Israeli leaders have over the past year vowed they’ll do anything to ensure the Islamic Republic can’t possibly develop a nuke.

“The incidents have sparked speculation that Iran is under attack, with some pointing to arch-foe Israel as the culprit behind the supposed attacks,” the New Arab report continues. Iran has said it will respond if it’s confirmed that Israel or the US are behind it, including via cyber-attacks. “Speaking on condition of anonymity, the Middle Eastern intelligence official told The New York Times that Israel was behind the Natanz blast but not any of the other incident.”

Asia Times has asked: are we witnessing the “the son of Stuxnet?”

Five recent explosions in Iran may have been caused by computer viruses similar to the Stuxnet virus that disabled Iranian centrifuges in 2010.

Two of the blasts took place at power plants, one at a missile research, development and production site, one at a new uranium enrichment centrifuge center, and the last (if it can be considered part of the attacks) in downtown Tehran at a medical facility that could have been a cover for nuclear operations such as a hidden command center.

All of this has prompted a response out of Israel, with Israeli Defense Minister Benny Gantz on Sunday issuing a partial and somewhat ambiguous denial.

“Not every incident that transpires in Iran necessarily has something to do with us… All those systems are complex, they have very high safety constraints and I’m not sure they always know how to maintain them,” he told Army Radio.

Iran suspects the US and Israel of trying to disrupt its nuke program. https://t.co/G2ueIH4JnV


“Everyone can be suspicious of us all the time,” Gantz said. “But not every incident that happens in Iran necessarily has something to do with us.”

Recall that just a year ago it was a long hot summer of ‘tanker wars’. And now it seems a sabotage war on Iranian soil, targeting weapons and nuclear development, despite Tehran claiming its nuclear facilities are for peaceful domestic energy purposes.