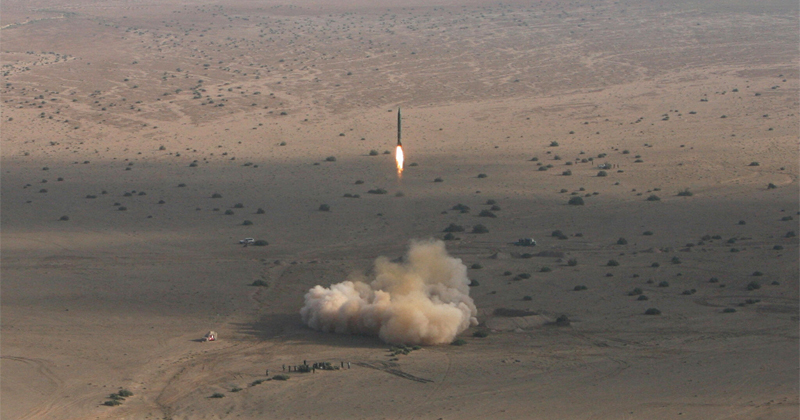 In timing sure to make things awkward at the UN where the Security Council just voted down the United States’ bid to extend the weapons embargo on the Islamic Republic, Tehran has unveiled a new ballistic missile named after Gen. Qassem Soleimani, killed last January in a US drone strike.

“Iran displayed locally made ballistic and cruise missiles – a move certain to anger the United States as it prepares to demand that all UN sanctions be reimposed on the country,” Al Jazeera reports. State media featured a ballistic missile launch test in the desert Thursday.

The other missile is named after Iraq’s top Shia militia leader who was killed in the same convoy while traveling with Soleimani through the Baghdad airport, Abu Mahdi al-Muhandis.

Defense Minister Amir Hatami touted the ballistic missile’s range of 1,400km (or 600 miles), with the cruise missile at an estimated 1,000km (400 miles), which flies in the face of Washington’s demands that Iran shut down its advanced missile program.

Indeed the Iranians almost seem positively boastful, choosing this moment to show off the new missiles as a thumb in the eye to the United States, given it was only last Friday night the UN vote was announced wherein the US utterly failed to achieve its objective. The only “yes” vote the US could muster in its favor was from the Dominican Republic.


“Missiles and particularly cruise missiles are very important for us… The fact that we have increased the range from 300km to 1,000km in less than two years is a great achievement,” Iran’s President Hassan Rouhani said on the occasion of the new weapons roll out Thursday. “Our military might and missile programs are defensive,” he emphasized.

Though Iran hawks have consistently warned these ballistic missile pursuits go hand in hand with Tehran’s alleged nuclear weapons aspirations, and could be used to attack US allies like Israel or even American bases in the region (as happened earlier this year in response to the Soleimani assassination), it must be remembered that the two countries immediately bordering Iran on either side have both been attacked by the United States and are still being occupied.