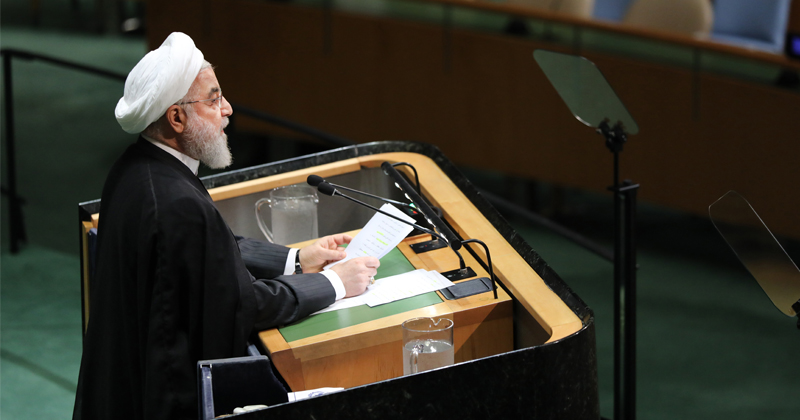 In his address to the United Nations General Assembly on Wednesday, Iranian President Hassan Rouhani ruled out negotiations with the US as long as economic sanctions against his country are in place.

“I would like to announce that our response to any negotiation under sanctions is negative,” Rouhani said, adding that the US must lift the sanctions to pave the way for meaningful negotiations on a nuclear deal.

The 2015 deal was struck over concerns about Iran’s nuclear program, which Tehran insisted was for civilian use, aimed to produce weapons. US President Donald Trump withdrew from the accord last year and reimposed sanctions.

European powers opposed the US implementation of sanctions and have sought to keep the deal alive, in part by trying to shield Iran from the impact of the US penalties.

Iran Warns US To Stay Away, Or Else

Iran has warned the United States that any military action against the middle-eastern nation will be very costly.

Rouhani touched upon on a number of topics in his UN General Assembly speech, including the conflict in the Persian Gulf, the oil shipment in the Strait of Hormuz and the conflict in Yemen.

He warned that a “single blunder” in the region could “fuel a big fire.”

With tensions high and conflicts flaring, the region was “on the edge of collapse,” Rouhani said, adding that the regional security would improve when the US pulls out its troops.

The Iranian president demanded that Saudi Arabia end its “offensive” in Yemen after an attack in the oil-rich kingdom, which Washington and Riyadh blamed on Tehran.

“The security of Saudi Arabia will be guaranteed with the termination of aggression in Yemen, rather than by inviting foreigners,” he said, adding that the regional security was the responsibility of regional countries, not the US.

“Security shall not be supplied with American weapons and intervention,” he said. “Security cannot be purchased or supplied by foreign governments.”

“The US failed to solve conflicts in Afghanistan, Iraq and Syria, and isn’t capable of playing a role in calming tensions and bringing peace to the region now,” he said, adding that the UN must form a “coalition of hope” in the Persian Gulf region to promote peace, stability and welfare for all countries.

The Iranian president accused the US of unleashing “merciless economic terrorism” on his country.

Rouhani dubbed the US sanctions against his country the “harshest in history,” saying that Washington has “made a lot of efforts” to “deprive Iran from the advantages of participating in the global economy.”

Despite restrictions created by the US, Iran’s economic growth has been exemplary, according to the Islamic country’s president.

Trump’s Own Interests NOT Served by Iran War

Trump is repeatedly targeted with heavy lobbying from neocons and the war machine.