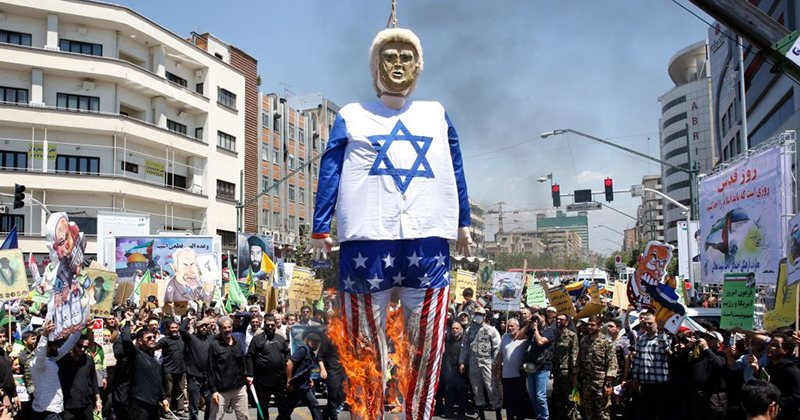 We are at one of the most critical turning points in modern world history, and whether or not we will be able to avoid World War 3 will come down to a handful of key decisions that Donald Trump will make over the next few days.

The entire globe was shocked when Iran fired more than a dozen ballistic missiles at U.S. bases in Iraq a few hours ago.

But the initial reports indicate that there were no U.S. casualties, and the Iranians are telling us that there will be no further attacks as long as the U.S. does not retaliate.

So this gives Trump the opportunity to de-escalate the conflict and still save face.

Since we were able to take out Qassem Soleimani without losing a single American life, Trump can simply claim victory and move on.

Trump told himself in the past the heavy cost of war, and why he would fight for peace. Alex Jones and Syrian Girl help remind him of this sage advice.

Also, take advantage of the final hours of our Mega Blowout Sale with free shipping and up to 75% off our hottest items!

But there will be an enormous amount of pressure on Trump to respond militarily to this attack, and if that happens the Iranians are already promising to escalate the conflict to an entirely new level.

In particular, the Iranians have repeatedly warned that they will bomb Israel if there is U.S. retaliation.

And if Iran attacks Israel, the Israelis will likely respond with overwhelming force, and once that happens nobody is going to be able to stop a major war from happening.

This could literally be our last chance to avoid World War 3, and hopefully President Trump is getting some really good advice from the people around him.

Because I believe that the Iranian threats are very real.  Shortly after launching missiles at U.S. bases in Iraq, the Iranians threatened “to bomb Israel and Dubai if the United States retaliates”…

Iran has threatened to bomb Israel and Dubai if the United States retaliates for its ballistic missile strike at two Iraqi bases housing US troops.

Tehran fired more than a dozen ballistic missiles at two Iraqi bases housing American troops in a revenge attack for the US drone strike that killed top Iranian general Qassem Soleimani on Friday.

Iran is warning that if there is retaliation for the two waves of attacks they launched their 3rd wave will destroy Dubai and Haifa.

Of course this is not the first time that we have heard such threats.

On Sunday, the head of Iran’s Expediency Council warned that if Trump escalates the conflict, Iran would “strike Haifa, Tel Aviv and wipe out Israel”…

Mohsen Rezaei, head of Iran’s Expediency Council and former chief of the Iranian Revolutionary Guards Corps, said on Sunday Iran will target Israel during a confrontation with the US.

“If Trump retaliates to Iran’s revenge, we will strike Haifa, Tel Aviv and wipe out Israel,” said Rezaei.

And then on Monday, the chairman of the Iranian Parliament’s National Security and Foreign Policy Commission said that the nation of Israel would be wiped out in “half an hour” if the U.S. attacks Iran again…

A senior Iranian lawmaker on Monday threatened that Israel would be destroyed in “half an hour” if the United States attacks the Islamic Republic.

“If the US attacks us, only half an hour will remain of Israel’s lifespan,” said Mojtaba Zolnour, chairman of Iranian Parliament’s National Security and Foreign Policy Commission, in comments carried by the Mehr news agency.

After being stirred up so much by their leaders, hordes of Iranians loudly chanted “death to Israel” over and over during the funeral procession of Qassem Soleimani on Tuesday.

Even though this is a conflict between the United States and Iran, clearly the Iranians want to make this about Israel as well.

Israeli Prime Minister Benjamin Netanyahu told Security Cabinet ministers Monday Israel is not responsible for Soleimani’s death and does not want to be pulled into a confrontation between Iran and the US, Axios reports.

“The killing of Soleimani is a US event, not an Israeli event, and we should stay out of it,” Netanyahu is quoted as saying according to two sources.

But the moment the first missile from Iran hits Israel, everything will change.

Israel has been preparing for a war with Iran for a very long time, and the Israelis would likely strike back with such force that it would absolutely stun the entire planet.

And once that happens, nobody is going to be able to stop a major war from happening.

The storm clouds that have been building on the horizon are now directly over top of us, and if this window of opportunity to avert war is missed we may not get another chance.

So let us hope that President Trump grabs this opportunity and does not choose to escalate the conflict even more.

Unfortunately, all of the war hawks in Washington will be urging him to do just the opposite, and at this point it is difficult to see how a major war with Iran will be avoided.

And most Americans actually believe that one is coming.  In fact, a survey that was just released found that 71 percent of all Americans believe that “the U.S. will be at war with Iran within the next few years”…

A separate Reuters/Ipsos poll that ran Jan. 3-6 found that 41% consider Iran to be an “imminent threat” to the United States, up 17 points from a similar poll that ran in May 2019. (https://tmsnrt.rs/35xJUDA)

It also found that 71% of Americans believe that the U.S. will be at war with Iran within the next few years, up 20 points from May’s poll.

But this war won’t be anything like our wars in Afghanistan, Iraq and Syria.

It would literally be a worldwide life or death conflict with Iran, their proxies and millions upon millions of Shiite radicals wherever they are located.

They would fight dirty, they would throw everything that they have at us, and they would go after targets on U.S. soil.

We are definitely not prepared for such a war, and so let us hope that it can be averted somehow.

But I have a feeling that there will soon be a U.S. military response to the missile attacks, and then we shall see how serious the Iranians really were about striking Israel.