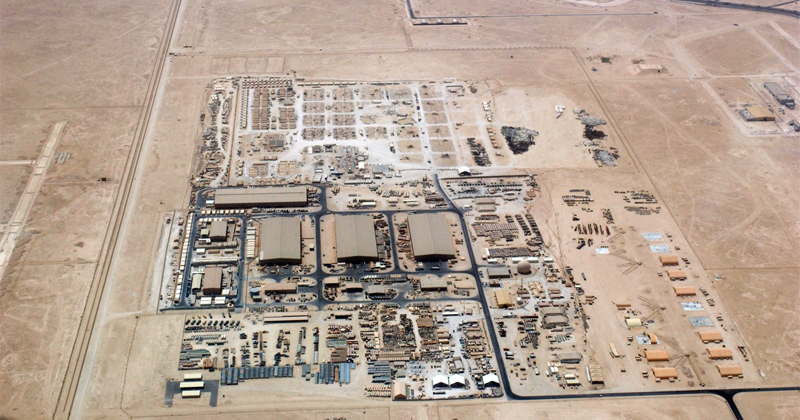 The IRGC has released detailed images of Al-Udeid Air Base – the Qatar-based home of the US military’s Central Command, with the snaps taken by Iran’s new domestically-developed ‘Noor’ (Light) military satellite.

First we see what looks like a satellite tracking station, then a graphic of "IRAN_SAT" sending signals to Tehran. Next, imagery of Al-Udeid Airbase, which seem to be taken at different times. You can see changes in positions of KC-135s. "Changes in targets" written underneath 2/ pic.twitter.com/FqrGWEbmAd


The images include several detailed snaps of the airbase itself, with the pictures apparently taken during various intervals, based on the changing positions of aircraft on runways. One of the images appears to be an infrared view showing heat signatures emitted by aircraft and the nearby facilities.

Al-Udeid is the US’s largest military base in the Middle East, with as many as 11,000 personnel permanently stationed at the facility at any one time, and the base used to direct US military operations across the region.


The images are featured in a video showing off Iran’s drone, air power and missile might, with drones, planes and missiles shown to be targeting a range of objects, including a mock-up aircraft carrier.

The images were released amid the ongoing ‘Great Prophet 14’ military drills in Hormozgan province, southern Iran, with the territory bordering on the Persian Gulf and the Strait of Hormuz. The massive drills kicked off on Tuesday. In addition to its intelligence-gathering activities, the Noor satellite has reportedly been used to monitor the exercises from space.

The Noor satellite was launched into orbit in April. US Chief of Space Operations Gen. Jay Raymond derided the launch at the time, calling the satellite a “tumbling webcam in space” and suggesting it would be “unlikely” to provide Iran with any usable intelligence.

US troops at the Al-Udeid Air Base and the nearby Al-Dhafra Air Base in Abu Dhabi, UAE were reportedly temporarily put on alert this week after missile fire was detected in the area where the drills are taking place. “The incident lasted for a matter of minutes and an all clear was declared after the threat…had passed,” US Army Maj. Beth Riordan was quoted as saying.

The US Navy slammed Iran’s ‘Great Prophet 14’ drills on Wednesday, taking special issue with the use of a mock-up of a US aircraft carrier. “We are always watchful of this type of irresponsible and reckless behaviour by Iran in the vicinity of busy international waterways,” a spokesperson for the US Fifth Fleet was quoted as saying.

In addition to the satellite, Iran showed off the capabilities of its underground missile units during the drills. Drone units, aircraft, and a variety of sea-to-sea and coastal defence missiles were fired during the wargames. On Wednesday, IRGC Aerospace Force Commander Brig. Gen Amir Ali Hajizadeh revealed that the drills also included defeating a simulated US Theater High Altitude Area Defence (THAAD)-style system by targeting it with radar-evading missiles. “With the facilities in our possession, we can hit any hostile target at any location in the Persian Gulf region, the Sea of Oman, and the Indian Ocean,” Hajizadeh said.

The drills come in the wake of the latest escalation in tensions in the already strained Iranian-US relationship last week, after an Iranian passenger airliner was forced to take evasive maneuvers following an interception by two US fighter jets over Syrian airspace. Iranian President Hassan Rouhani called the incident an act of “aerial terrorism” by the US, and urged the International Civil Aviation Organisation, the United Nations Security Council, Syria and Lebanon to take appropriate action to hold Washington accountable for its alleged violation of international law.