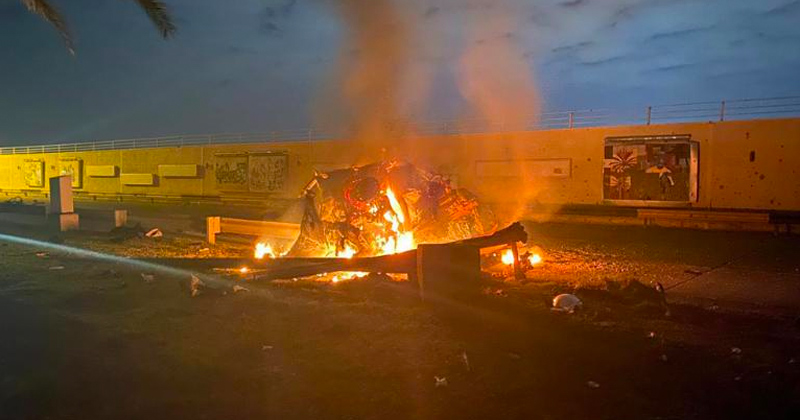 Update 3: The Pentagon has confirmed that Soleimani was killed at the direction of President Trump in what it termed a “defensive action” as per the following statement:

And while Trump has yet to make a statement, shortly after the news of Suleimani’s death, the president tweeted an American flag with no commentary:

This is the spark that could set the whole region on fire, given Suleimani is Iran’s most important, visible and powerful military leader.

Journalists are circulating graphic photos of the blast aftermath, seeking on the ground confirmation of Suleimani’s identity:

Is it the same ring or similar? Asking for expert opinion #Iraq , this is Qassim Sulaimani the Iranian leader of Quds force #Baghdad pic.twitter.com/Xe4viCWKXY

At the beginning of the last decade, when Gen. Suleimani began becoming a more visible and powerful face of influence in Iran and across the Middle East, one former CIA officer cited in a New Yorker biographical piece on him referred to the IRGC commander as the “most powerful operative in the Middle East today.”

As leader of the Revolutionary Guards’ most elite Quds force, he directed all unconventional warfare and intelligence activities abroad. For that reason Washington and Tel Aviv had long considered him threat #1 within the Iranian military command structure.

Source in #Iran tells me:
Senior Iranian diplomats are sharing Gen. Qasem Sulaimani’s photo along w/death prayers for him. #Iraq

With war in the Middle East now virtually inevitable, here is the latest US naval deployment as of Jan 2:

update: It appears the ‘mystery’ strike which took out vehicles along the perimeter of Baghdad International Airport in the early morning hours of Friday was actually a US targeted assassination.

If that’s accurate, the #Trump admin just ratcheted up the ante in #Iraq in a big way. pic.twitter.com/p784XmVVq7

There are even significant but as yet completely unconfirmed rumors, some coming from of a well-known BBC Iran reporter and other regional sources, that Iran’s most senior military commander, the IRGC’s Quds Force chief Qasem Suleimani was taken out in the hit, which appears to have been an airstrike.

FWIW, there have also been denials of this – from potentially reputable sources. #Iraq https://t.co/Ik6ipMJq1g

According to Stars and Stripes:

The attack, which set two cars ablaze, apparently occurred at about 1 a.m. Social media users posted hearing the explosions, then the sounds of military aircraft.

The Iraqi defense ministry’s security information cell confirmed the strike about 45 minutes later, posting photos of the burning vehicles on its Facebook page and attributing the damage to a rocket attack.

Just who those “guests” were remains the major question as huge rumors of Qasem Suleimani’s death continue to spread, however unlikely.

It true this could be the spark that ignites WWIII in the region, given Suleimani is Iran’s most important and powerful military leader.

Sources at the #Baghdad international airport tell me that “the main targets were #PMF leader Abu Mahdi Mohandis & #Iran‘s Qassem Soleimani as they were at the airport tonight”
They weren’t sure if these two got in the convoy or not.#Iraq
Can’t still confirm it 100%

At a moment tensions are on edge after pro-Iran militia protesters attacked and set fire to the outside of the US embassy compound in Baghdad’s Green Zone earlier this week, another major incident is developing overnight.

Reuters and Al Jazeera are reporting that at least three missiles struck on or near a base that houses American and Iraqi counter-terrorism forces in the early Friday morning hours at Baghdad International Airport.

All civilian flights have been canceled as US military helicopters were also seen patrolling the skies in the immediate aftermath.

Al Jazeera has cited Iraqi security sources to say that though the rocket attacks appeared to have targeted a joint US-Iraqi training base within the sprawling airport perimeter. At lease one of the projectiles landed near a passenger terminal, causing an immediate shutdown of the civilian side of the airport.

It is the second such rocket attack on the airport in under a month, after on Dec.9 four projectiles were launched on the facility, targeting the US-Iraqi base on the property.

Footage shows civilian cars outside of Baghdad Airport on fire after being hit by missile/s. Via @omartvsd #Iraq pic.twitter.com/9lTCRLqkik

Vehicles at the airport were filmed exploding as a result of the attack, and there are conflicting reports of possible civilian casualties.

Kurdistan24 journalist Barzan Sadiq has said at least one civilian was killed in the attack with more injured, as well as multiple Iraqi military personnel among the wounded.

While details are as yet unclear and unconfirmed at this point, Reuters did confirm the following per local security authorities:

Earlier in the day Defense Secretary Mark Esper put Iran and its proxies on notice, saying the US is prepared to launch “pre-emptive action” if American troops and interests come under threat.