Hillary Clinton, as Secretary of State, created false pretenses for the invasion of Libya in much the same way neocons used fabricated intelligence as an excuse to launch a war against Iraq during the Bush era.

On Wednesday, the Washington Times reported the discovery of tapes recovered from Libya revealing Clinton had “developed tunnel vision and led the U.S. into an unnecessary war without adequately weighing the intelligence community’s concerns.”

An intermediary dispatched by the Joint Chiefs of Staff told Col. Moammar Gaddafi’s son Clinton and the State Department had produced “stupid, stupid facts” that were sent to Congress in the lead-up to the NATO invasion of the north African nation.

Clinton argued the Gaddafi regime would engage in genocide and produce a humanitarian crisis in response to an Arab Spring uprising in Libya.

The so-called Arab Spring was aborderless color revolution-esque effort launched by the International Republican Institute, the National Democratic Institute, Freedom House and the National Endowment for Democracy to reformulate the political landscape in the Middle East, beginning in Egypt.

“It was like the WMDs in Iraq. It was based on a false report,” Gadhafi’s son and heir apparent, Seif Gaddafi, said in a May 2011 phone call to then Democrat Rep. Dennis J. Kucinich.

In fact, the humanitarian crisis in Libya developed following the invasion, not before. According to the United Nations, approximately 750,000 refugees were forced to leave the country after the NED and State Department instigated “rebellion” against Gaddafi broke out. At least 30,000 people died during the manufactured war.

The supposed rebels were comprised primarily of al-Qaeda terrorists who were purposely armed and supported by the CIA.

“And now you have NATO supporting them with ships, with airplanes, helicopters, arms, training, communication,” Seif Gaddafi told U.S. officials. “We ask the American government send a fact-finding mission to Libya. I want you to see everything with your own eyes.”

The Libyan war designed by the Clinton State Department and initiated by NATO and the United Nations served the usual clients — the military-industrial complex, the financial class and big oil.

“Libya has the largest oil reserves in Africa. The objective of US-NATO interference is strategic: it consists in outright theft, in stealing the nation’s oil wealth under the disguise of a humanitarian intervention. This military operation is intent upon establishing US hegemony in North Africa, a region historically dominated by France and to lesser extent by Italy and Spain.”

Despite Hillary Clinton’s age, her medical issues and largely glossed over criminal behavior, she will likely become the next president of the United States.

She is the preferred candidate of the neocon faction of the ruling elite and is more “hawkish” than her putative opponents, Jeb Bush or Mitt Romney.

Robert Kagan, an influential neocon, and Max Boot, a senior fellow at the Council on Foreign Relations, believe Clinton “was a principled voice for a strong stand on controversial issues, whether supporting the Afghan surge or the intervention in Libya.”

“It’s easy to imagine Mrs. Clinton’s making room for the neocons in her administration,” Jacob Heilbrunn wrote for The New York Times in July. “No one could charge her with being weak on national security with the likes of Robert Kagan on board.”

Influential Democrats across the board support Clinton’s presidential bid and corporate media polls show Americans support Clinton over her rivals by a wide margin (57% of those polled oppose Bush and 60% are against Romney).

Of course, it is basically irrelevant who occupies the White House come 2016. The financial class and its political operatives in the Democrat and Republican parties will make certain the next president continues the policies attributed to the prior president who, naturally, continued the foreign policy directives of his predecessor. 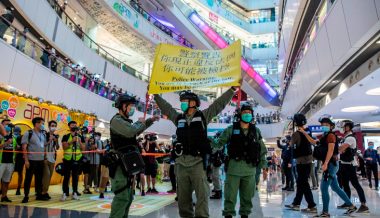