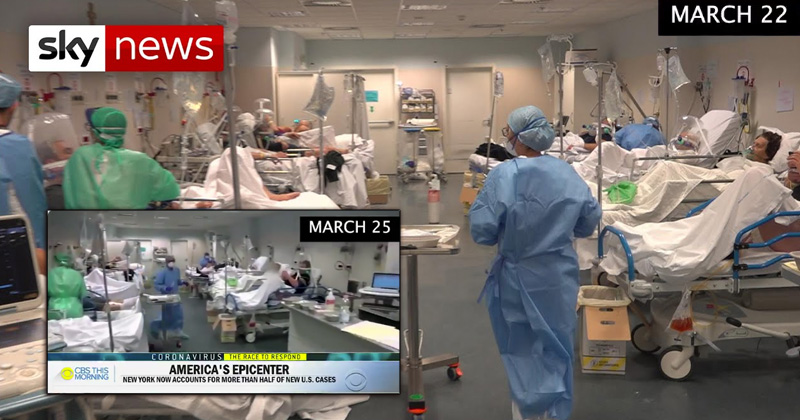 CBS News is being called out for airing footage from an Italian hospital during a report on New York hospitals being overwhelmed.

The CBS This Morning report in question was uploaded to YouTube March 25, and covers New York Governor Andrew Cuomo taking the Trump administration to task for not providing more ventilators.

Read a transcript from the CBS News clip:

To that he said this:

The footage appears to have come from a March 19 Sky News report which showed video inside an Italian hospital in Bergamo where doctors and nurses are attempting to save coronavirus patients.

The sheer numbers of people succumbing to the coronavirus is overwhelming every hospital in northern Italy.

The staff are working flat out trying to keep these people from deteriorating further.

They’re trying to stop them from dying.

This isn’t an Intensive Care Unit, it’s an emergency ward. The ICU is full.

People have only just arrived here and they’re in terrible shape.

Many on social media slammed CBS News for its inaccurate reporting.

“Especially in times of a crisis where people are already in a panic, the Media needs to give accurate information.”

“Irresponsible,” he added, tweeting a side-by-side comparison of the footage.

Others also called out the inaccuracy.

During a Pandemic it is essential that the Media gives us real and accurate information.

It’s completely irresponsible for @CBSNews to use footage from an Italian Hospital when talking about the outbreak in New York City.

Picture on the Left is taken from a Hosptial in Italy on March 22nd.

Picture on the Right is CBS News portraying it as New York on March 25th. pic.twitter.com/FyFmCEG7Ni

CBS did not immediately respond to a request for comment as of writing.

Collection of videos from the last three days from Corona virus hotspots showing empty waiting rooms, no lines EMS sitting in their cars. The lone video showing patients is from Jamaica hospital.