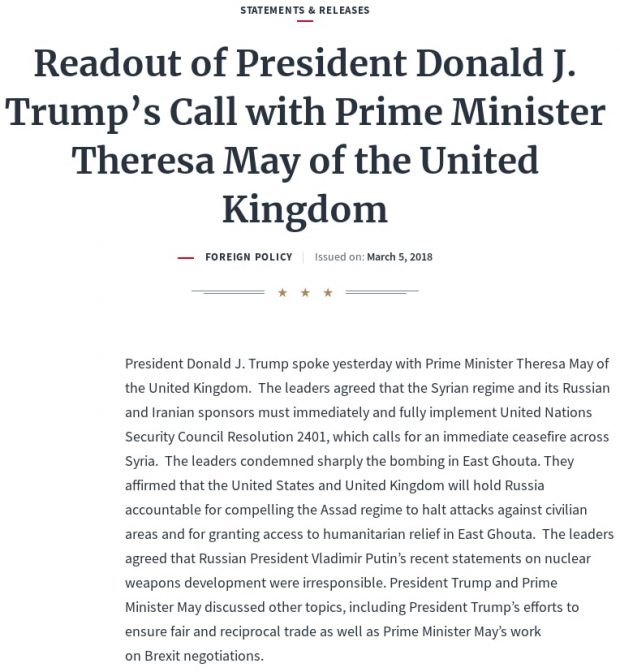 According to the White House, Trump and British Prime Minister Theresa May deemed during a phone call the Russian leader’s announcement “irresponsible.”

“The leaders agreed that Russian President Vladimir Putin’s recent statements on nuclear weapons development were irresponsible.” a readout of the call states.

During a speech at Russia’s annual State of the Union address Thursday, Putin unveiled new defense measures including a nuclear-powered cruise missile allegedly capable of reaching “any point in the world.”

“It can attack any target, through the North or South Pole,” Putin said. “It is a powerful weapon and no missile defense system will be able to withstand.”

Video animation of the new weapon shows that the missile is highly maneuverable and does “not use ballistic flight paths on the way to the target,” Putin stated.

While Putin claims the weapon was successfully tested in 2017, Pentagon officials speaking with Fox News have said the missile recently crashed during a test in the Arctic.

“The nuclear powered cruise missile Putin bragged about has actually crashed a few times,” one official said. “Think about the environmental impact of that.”

The Pentagon stated following Putin’s speech that it was “not surprised” by the Russian president’s declaration.

“We’re not surprised by the statement, and the American people should rest assured that we are fully prepared,” Pentagon spokeswoman Dana White said. “We need to ensure we have a credible nuclear deterrent, and we are confident that we are prepared to defend this nation no matter what.”

Analysts fear the U.S. and Russia could find itself in a renewed nuclear arms race if both countries fail to de-escalate current tensions.