Without any direction from the President, if you believe the current denials, the IRS went on a politically-motivated rampage that turned its own agents into weapons of intimidation and censorship against any non-profit which taught the Constitution or used conservative buzzwords like “We the People.”

As part of its campaign of tyranny, the IRS demanded from the groups titles of all the books they had recently read, details of Facebook posts and names of all their donors. They even asked for the names of students they taught! Applications for non-profit status were routinely denied or delayed, and a huge number of individuals including Catholic priests were warned that if they didn’t stay silent about opposing Obama, they would be “scrutinized” even further (i.e. audited or worse).

Obama says he knows nothing about any of this, even though he was of course the primary beneficiary of all this activity. But let’s assume he’s telling the truth for a moment, as bizarre as that idea may seem to most. If Obama really knew nothing about all this, it paints an even more frightening picture of a rogue government group with unlimited power that answers to no one and does whatever it wants, regardless of the legality of its actions or directions from Washington.

And then, once the truth comes out and the criminal behavior is exposed, those who carried out the crimes say, “We were just doing what our bosses told us” while their bosses — the heads of government — say, “We had no idea what these people were doing. They went rogue!”

Lawless government out of control

What the IRS scandal really proves is that big government is completely out of control. Give an unelected group a bureaucrats enough power — the IRS is run by appointees who don’t answer to voters — and they will sooner or later construct fiefdoms of corruption and criminality.

This is a universal law of bureaucracy. What the IRS did to conservative groups, the FDA is routinely doing to natural products manufacturers and supplement companies. It’s what the DEA is doing to medical marijuana dispensaries and what the FTC is doing to religious ministries that also happen to sell herbs for cancer.

All bureaucracies become criminal mobs if given enough time and power. This is a screaming red flag with a clear message: Government is TOO BIG, too complex, too powerful and is operating far outside its limits of power.

Government is the biggest threat to freedom and justice in America today.

In fact, this IRS criminality has been going on since at least 2010, and the agency has been getting away with it until just now when a few facts just happen to come to light. No one knows just how many people have been threatened and intimidated, mobster-style, by the IRS which focused its efforts on intimidating those who were speaking out against Obama. Technically, this behavior by the IRS calls into question the validity of the entire 2012 presidential election. Had the IRS not been engaged in overtly criminal activity to suppress the free speech of non-profits critical of big government, the election may have very well turned out differently.

Government bureaucracies answer to no one

What’s even more frightening in all this is that government bureaucracies — FDA, IRS, DEA, FTC, etc. — ultimately answer to no one. And when they break the laws, nobody is held responsible and no one goes to jail.

If you or I commit felony crimes and engage in intimidation of fellow citizens in order to silence their speech and violate their civil rights, we will get drawn up on felony charges by the feds. But when the feds do it, the crimes are ignored.

No wonder everyone is so completely fed up with the IRS and the Obama administration. Across the board, republicans and democrats alike feel outrage at the realization that the Obama government is a rogue criminal mob operating far outside the bounds of law and the constitutional limits of government. There is nothing this government cannot and will not do to stay in power and destroy its critics, including threatening them with IRS attacks if they speak out against Obama.

This is how tyrannies come into being. As Michael Gerson writes in the Washington Post:

In each recent case, government used power in ways that were insular, highly politicized and intimidating. And however individual responsibility is eventually assigned, these attributes are not aberrations in the Obama era. The administration tends to view its actions as above scrutiny and its opponents as beneath contempt.

The result is a paradox. As the ambitions of government in the Obama era have expanded, respect for the institution of government has reached new lows. These scandals add another layer of cynicism. And the practical political effects are very real. Who is more likely this month than last to trust the federal government with the implementation of Obamacare (in part by the IRS), the enforcement of new gun-control laws or the securing of the southern border?

Another interesting realization in all this concerns those of us who have been warning about the runaway criminality of the Obama administration for the last several years. Websites like www.InfoWars.com and www.NaturalNews.com (as well as others) have been blowing the whistle on the criminality of Eric Holder and the Justice Department, which ran Operation Fast and Furious (smuggling guns into Mexico).

We’ve been warning about the selective prosecution of whistleblowers, the rise of government tyranny, government selling out to global banksters and the attempts to intimidate critics of government into silence. All this time, we’ve been labeled “conspiracy theorists” by the mainstream media, which somehow believes there are no such things as conspiracies.

Now the world is waking up and realizing the conspiracy theorists were right all along. The Obama administration really is a criminal enterprise run by genuine mobsters and crooks. America really is “occupied” by an enemy force that respects no law and uses its power to dominate and intimidate the people rather than serving them.

We have crossed the Rubicon of criminal government. And the only way to restore liberty at this point is to indict and prosecute the criminals responsible, all the way up the chain as high as it leads.

Because a government that would use the IRS as a political weapon of intimidation would do anything. It makes you think twice about everything you’ve heard on FEMA camps, martial law, false flag attacks, population reduction, fluoride and vaccines, doesn’t it? It forces us all the ask the question: Is there any limit to how far the Obama administration will go to destroy opposition to its agenda of a big government takeover of everything? 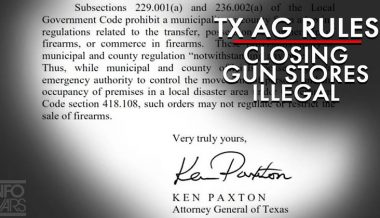