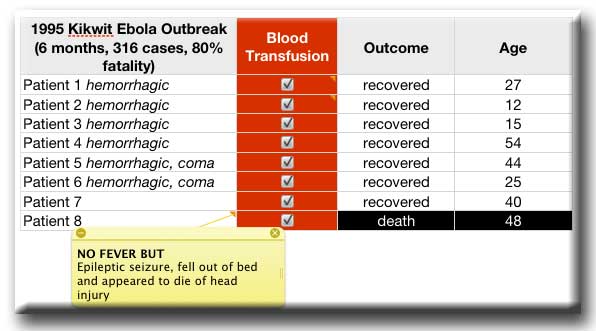 Is convalescent serum unproven as the WHO says? It’s a treatment technique that’s been used effectively for 124 years, called passive immunity.

Dr. Kent Brantley and others who have contracted Ebola have been eager to receive and to pass on blood from survivors of Ebola.  He received blood plasma antibodies from a patient he treated in Africa that survived.  After Dr. Brantley survived, he donated plasma antibodies to the next American doctor to be infected, Dr. Sacra who also recovered.  Brantley has also donated blood to two others who are still fighting Ebola: Ashoka Kukpo, the NBC cameraman, and Nina Pham the first Dallas nurse to contract the disease.

Brantley is not the only medical worker who appears to believe the treatment is effective.  Will Pooley, the British nurse who survived Ebola, flew to Atlanta to offer his blood and a Spanish Ebola survivor flew to Spain to give her blood to a Spanish priest with Ebola, but arrived too late.

In Africa, demand for survivors’ blood has created a “black market” that the World Health Organization (WHO) says needs to be shut down with help from governments.

The WHO said months ago that the treatment is “unproven” but “promising” and that they need to “look into” it someday.

Still no word on when that’s going to happen.

As mainstream media casts doubt on convalescent serum’s effectiveness, it promotes the GMO drug ZMapp as a “miracle”.

ZMapp was created by a small company backed by DARPA, the military industrial complex’s bio-weapons bureaucy and Big Tobacco.

Mass production of the GMO drug is ramping up with funding from the Gates Foundation, and the bio-pharmaceutical industry.

Which begs the questions:  why develop a GMO imitation if the human version is “unproven” and why delay treatment when a large supply of convalescent serum is now available from survivors?

DARPA’s “miracle” drug imitates a strategy WHO says is unproven

The method is called passive immunity and it has a long history — all the way back to the 1880’s.  German scientist Emil von Behring won a Nobel Prize in 1901 for his work in successfully treating diphtheria and tetanus with convalescent serum.  Blood plasma antibodies were used in the early 1940s to prevent and treat measles and hepatitis.  Techniques for large scale fractionation of plasma to separate antibodies were developed by Cohn and funded by the US government as World War II preparation.  Most recently a Hong Kong scientist used convalescent serum to successfully treat patients in the SARS outbreak.

He claimed a quick recovery and no side effects for the 70 patients he treated.

A study of convalescent serum treatment for Ebola patients was done during the 1995 outbreak.  It was a small study, with only 8 patients.  But all previous Ebola outbreaks have been relatively small.  This outbreak only affected 316 people with 80% casualty rate.  In the study, 7 of 8 convalescent serum patients survived — a 12.5% casualty rate.  The one who died no longer had fever but had an epileptic seizure and was found dead, next to her bed, with a head injury.  So it’s possible that it was 100% effective.

The study looked very promising but when it was released as a paper in 1999, they added anecdotal accounts of 12 other patients who received convalescent serum, 11 of whom died.  Why they added this is puzzling since, unlike the study, we know nothing about the patients, donors or blood serum.  The study was carefully monitored to be sure that patients received clean blood with no Ebola antigens or other diseases present.  The age and condition of patients and donors was documented along with how long it had been since the donors had recovered.  None of that information was given for the footnoted patients.

How does ZMapp compare to convalescent serum?

The ZMapp vaccine was used in a test of 18 monkeys.  All survived.  In humans, it has been given to 7 patients worldwide — 3 Liberians and 4 westerners.  It’s unpublished whether the 3 Liberians who received ZMapp also got convalescent serum.  Two survived, one died.  Of the remaining four, Kent Brantley and Will Pooley got both ZMapp and convalescent serum. Nancy Writebol got ZMapp and blood transfusions but not convalescent serum.  She said she began to have an allergic reaction to ZMapp and they reduced the dosage.  Miguel Pajares, a Spanish priest, received only ZMapp and died.  So its not clear whether ZMapp or convalescent serum cured Brantley and Pooley since they got both.  Of patients who received only ZMapp, 1 survived and 1 didn’t. In fairness, the trial is too small to draw conclusions but with only a 50% survival for the “miracle” drug, it’s the only one being put into production.

What is the treatment strategy planned by governments and corporations?

A large supply of real human antibodies is already on hand from thousands of Ebola survivors.  Testing donor blood for disease and creating a donor registry to match blood types could be done today but the plan is to pursue the artificial patented approach.

The Gates Foundation and bio-pharmaceutical industry want to grow the ZMapp GMO antibodies in animals rather than plants.  They say that approach will increase production in the long run but delay deployment of the drug for months.

By the time Big Pharma ramps up production of the GMO “plantibodies” used in ZMapp, Ebola will be a worldwide pandemic at the current exponential rate of growth in Africa.  Even though the safety and efficacy will not be known, a lot of customers will literally be dying for their product.  They may be “forced” to charge exorbitant prices for a limited supply.

Most of the treatments in development utilize genetic attacks against the Ebola virus.  What are the potential side effects of these treatments?  To stop a pandemic they will be rushed to market without testing for safety or effectiveness.  Even if a drug is safe and effective, will dangerous additives be present when it’s mass produced?  And will these untested drugs be mandated for the population?

In contrast to experimental GMO drugs, as long as convalescent serum is matched for blood type and screened for disease, there are no dangerous side effects.

Even though convalescent serum looks promising, it is not a magic cure either.   Palliative care, keeping the patients hydrated and electrolytes balanced, are major factors in survival.   The patients physical condition and the health of their immune system is even more important.

Cleanup crews delayed for days, nurses treating the patient for 2 days without protective clothing, a nurse with Ebola and manifesting a high fever given the OK to fly commercially , etc.  Is it merely jaw-dropping incompetence?  If it’s incompetence, then why haven’t the people in charged been fired or at least transferred?  Given the implicit endorsement of the violations of protocols and officials at the federal, state and local level not only lying to the public about risks but actually modeling behavior that will spread a pandemic, it looks like they would like another crisis that will be an opportunity for the government to increase control via a medical tyranny and for their corporation friends to transfer more wealth from the public to themselves.

Ignoring and dismissing transfusions of antibodies from survivors to patients while promoting a GMO imitation has implications beyond mere profiteering. We’ve seen this before with natural treatments denounced as ineffective while synthetic imitations of the same treatment are promoted e.g., medical marijuana versus marinol.

But if convalescent serum, used successfully for treatment for 124 years and highly valued by Ebola survivors, is not known to be effective, then why is the government mimicking it with GMO plantibodies?  Even with a 70% casualty rate, there are thousands of survivors who could become donors.  All that’s needed for immediate deployment of the treatment is a donor registry and testing.  But western governments and NGO’s are going to focus on a “magic” solution that won’t be available for months fiddling as Africa burns down.   In only 2 months, at the current rate of growth, Ebola will infect between 5% and 15% of the population.  Many will flee the chaos and death and it will go worldwide.  The potential for population culling, medical tyranny and corporate profits are staggering.