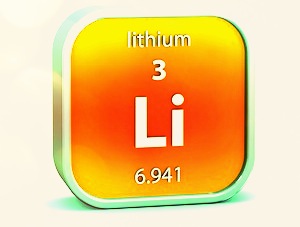 The health benefits of lithium orotate are causing an explosion in its popularity. I’ve been an advocate of lithium orotate for quite some time and have incorporated into some of my own formulations. A friend of mine, Dr. Mark Millar, is the leading authority on lithium orotate in the United States today. He published an eBook, “Veteran Suicide Breakthrough: Revealing the Breakthrough Mineral for Suicide Prevention, PTSD and Depression ‘They Definitely’ Don’t Want You to Know About” which is loaded with facts on lithium’s effects on the both body and brain. I’d really encourage you to check out his book, it’s powerful information you’re not going to hear from any mainstream source. I’d like to share a few of the shocking facts contained within the pages of Dr. Millar’s book but must reiterate that much of this is very controversial, disputed by the mainstream medical establishment, and should not be interpreted as claims, promises, or fodder to diagnose yourself. I am sharing this for educational purposes only!

• “Technically, lithium is not a drug but a mineral, similar to salt.” -VA Research Currents

• “In fact, lithium isn’t a drug at all. It’s actually a mineral-part of the same family of minerals that includes sodium and potassium.” -Jonathan Wright, M.D., author of “The Importance of Lithium Supplementation”

• Medical doctors are now speaking out about the essential trace mineral known as lithium, promoting its incredible therapeutic benefits at low doses.

• “Shocking but true — lithium is an essential trace element.” -Emily Deans, M.D., (Harvard trained psychiatrist) author of “Could You Have a Lithium Deficiency?”

• “Lithium is an essential micronutrient… It is present in all organs and tissues in the body. It has similar chemical properties to that of calcium and magnesium.” -Mark Hyman, M.D., best-selling author of “The UltraMind Solution”

• “Lithium is one of the most important elements in the human body.” -Lawrence Wilson, M.D., author of “Lithium”

• In animal studies, lithium has been shown to be an essential trace mineral. When lithium is removed from the diet of farm animals, they appear to develop numerous chronic, degenerative diseases. These include atrophy of the spleen, development of cysts and tumors, severely depressed immune systems, and decreased fertility. Additionally, the quantity of breast milk is diminished in nursing mothers with inadequate lithium stores.

• A study from Texas analyzed 27 state counties between the years of 1978-1987. It was discovered that the incidence of suicide, homicide, rape, drug abuse, and felonious acts were about 50% lower in the 27 counties with lithium-containing drinking water. The water had lithium levels ranging from 70-170 micrograms/L. Additionally, the study found a significant reduction in drug-related arrests within the same time period and locations.

• Lithium orotate “…does not require blood tests to establish a therapeutic level as prescription forms do, nor is it toxic to the kidneys like lithium pharmaceuticals.” In addition, “…Prescription lithium is poorly absorbed by cells, the main site where it performs its functions.” -Ward Dean, M.D.

• According to Jonathan Wright, M.D., America’s top authority on lithium orotate, a total daily intake of 30 milligrams of elemental lithium will have unnoticeable effects on serum lithium levels, with levels usually residing in a non-detectable range. Even 40 mg per day appears to be completely safe, presenting no negative side effects or signs of toxicity.

• Dr. Write also testifies that, “After decades of clinical research and laboratory testing of the compound on my patients, I discovered that administering lithium orotate up to 40 mg per day to be completely safe (without negative side effects or toxicity) and absolutely effective in the control of numerous mental, neurological, and physical conditions.”

• Another form of lithium, called lithium orotate, is preferred because the orotate ion crosses the blood-brain barrier more easily than the carbonate ion of the pharmaceutical lithium carbonate. Therefore, lithium orotate can be used in much lower servings (e.g. 5 mg) with remarkable results and no side effects. -Shaheen Lakhan, M.D., author of “Nutritional Therapies for Mental Disorders”

• “Lithium itself is not a drug; it’s a naturally occurring mineral salt like potassium, and is something you need for proper mental and physical health… Lithium orotate may be a safe and simple way to help beat the blues.” -Al Sears, M.D.

• “Prescription lithium is poorly absorbed by the cells, where it needs to be to do its job… Because it is so poorly absorbed, blood levels need to be fairly high to “drive” it into the cells. Unfortunately, these “therapeutic” blood levels are dangerously close to the toxic level. That’s why patients on prescription lithium need to be carefully monitored… Successful dosing with lithium orotate is measured by clinical effects on the patient, rather than by blood levels.” -Ward Dean, M.D.

• “Lithium Orotate will not cause weight gain, nor will it cause sedation or sleepiness.” -Ward Dean, M.D.

• In one study, 42 patients hospitalized for the management of their alcoholism were given 150 mg of lithium orotate every day. It was found that lithium orotate helped improve the effectiveness of alcoholism treatment. Ten of the patients experienced no relapse for over three to ten years. 13 patients remained alcohol-free for one to two years, and the remaining 12 experienced a relapse between 6 to 12 months. Lithium orotate therapy was seen as relatively safe, with minor adverse side effects seen in some patients (muscle weakness, appetite loss, mild apathy). For these patients, symptoms subsided following the reduction of lithium orotate administration.

Over 50% of the alcoholic patients who completed this study were without relapse for over one year and 25% of them made it over 3 years without a relapse. NOTE: The discovery of decreasing mild side effects through slightly reducing lithium orotate supplementation provides further scientific evidence that lithium has no inherent toxicity when taken in smaller, reasonable dosages. -A study titled: “Lithium orotate in the treatment of alcoholism and related conditions.”

• “Lithium orotate is a highly bioavailable form of lithium that is available as an over-the-counter dietary supplement.” -Linda Fugate, Ph.D., author of “Lithium’s Potential Role in Preventing Alzheimer’s Disease”

• “Lithium is a trace element which has important functions in the brain, including protecting brain cells from various toxins and reducing the ill effects of certain excitatory neurotransmitters which are harmful in large amounts.” -Alice R. Laule, M.D., author of “Lithium”

• “Lithium orotate, on the other hand, is more bioavailable and safer than the lithium carbonate.” -Jeffrey Dach, M.D., author of “Beating Depression Naturally”

• “Lithium is one of the most important elements in the human body.” -Lawrence Wilson, M.D., author of “Lithium”

• Harvard Medical School has analyzed over 30 human meta-analysis studies and has determined that lithium reduces the rate and risk of suicide attempts by 80-90% in patients with major depression, bipolar disorder, and schizoaffective disorder. In fact, the overall risk of suicides was five times less among lithium-treated subjects compared with individuals not treated with lithium.

• In human studies among healthy populations, lithium has been shown to significantly increase brain mass in both gray and white matter.

• Lithium is the most powerful essential trace mineral ever discovered for promoting optimal functioning of the brain and central nervous system.

• Lithium augmentation appears to be a promising therapy for geriatric depressed patients who are unresponsive to, or cannot tolerate, other standard therapies.

• “In some cases, adjunctive lithium leads to improvement in depressive symptoms very quickly, usually in 2 or 3 days.”

• In a placebo-controlled human study, lithium reduced histamine and bronchial reactivity in airway smooth muscle, improving symptom scores and significantly reducing the need of inhalers. Lithium also significantly reduced the contractile effect of histamine on the tissues of the lung and trachea in guinea pigs.

• Lithium has been shown to reduce excessive levels of arachidonic acid in the brains of rats. “…lithium might be considered for treating human brain diseases accompanied by neuroinflammation.”

• A comprehensive review of contemporary research conducted in 2010 and published in the Harvard Review of Psychiatry, determined that lithium is still the gold standard for the treatment of bipolar disorder.

• Multiple studies have suggested lithium’s possible role in preventing and alleviating migraines. In a study involving cyclical migraines, nineteen out of 22 patients (85%) responded to treatment and showed significant improvement in the frequency and severity of migraine headaches. 25% of the patients had complete remission of their migraine headaches and the remaining had a 50-75% reduction. In cluster headaches (the most severe type of headache), lithium is mentioned repeatedly in the research to be effective as a preventative measure.

• Lithium has profound antiviral properties against herpes infections and may significantly reduce the frequency and severity of herpes outbreaks. “Overall, lithium treatment resulted in a consistent reduction in the mean number of episodes per month, the average duration of each episode, the total number of infection days per month, and the maximum severity of symptoms.”

• Lithium has anti-inflammatory effects upon the bowel. Lithium has demonstrated benefit to ulcerative colitis in humans. Lithium has been shown to decrease symptoms of IBD in children. Lithium works at the core of stress-related illnesses by balancing, normalizing, and regulating stress hormones like adrenaline and noradrenaline. “Lithium, a widely-used drug in bipolar disorders, plays a gastro-protective role. The effects of lithium on several tissues are mediated through nitric oxide…”

• “One substance that I have found to be surprisingly effective for shingles is lithium orotate. Three to four capsules per day have been reported to dramatically reduce disabling pains. Lithium orotate seems to greatly reduce the pain and itching of post-herpetic neuralgia which can linger for months and years after the lesions of shingles have resolved.”

• In 1973, Dr. Hans Nieper reported that approximately 90% of his migraine patients reported significant relief in the frequency and severity of their headaches. He states that he was able to produce these results by utilizing a unique mineral transporter known as orotic acid (aka, orotate), thus allowing him to administer only minute amounts of lithium to achieve maximum results.

• Studies of lithium’s effect upon hyperthyroid conditions consistently demonstrate major regulation of thyroid hormones triiodothyronine (T3) and thyroxine (T4). The most common cause of hyperthyroid hormones is Grave’s disease. In a study of lithium’s effect upon Grave’s disease, it was determined that lithium reduced T3 by 42% and T4 by 28%. These amazing changes occurred in just 7 days.

• “Lithium has been reported to be beneficial in animal models of brain injury, stroke, Alzheimer’s, Huntington’s, and Parkinson’s diseases, Amyotrophic Lateral Sclerosis (ALS), spinal cord injury, and other conditions. A recent clinical trial suggests that lithium stops the progression of ALS. The stimulation of endogenous neural stem cells may explain why lithium increases brain cell density and volume in patients with bipolar disorders.”

• The majority of OCD patients are significantly helped by serotonin re-uptake inhibitors (SRIs). “In open-label reports, the addition of… lithium… has yielded encouraging results.”