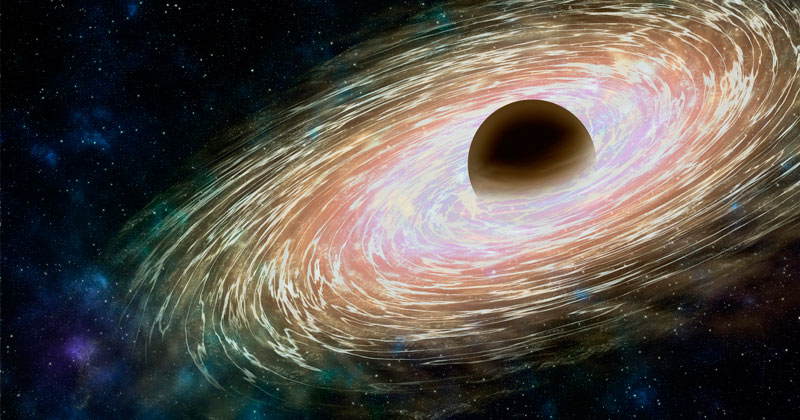 Scientists at Harvard University and the Black Hole Initiative (BHI) have developed a new method to find black holes in the outer solar system, and along with it, determine once-and-for-all the true nature of the hypothesized Planet Nine.

The paper, accepted to The Astrophysical Journal Letters, highlights the ability of the future Legacy Survey of Space and Time (LSST) mission to observe accretion flares, the presence of which could prove or rule out Planet Nine as a black hole.

Dr. Avi Loeb, Frank B. Baird Jr. Professor of Science at Harvard, and Amir Siraj, a Harvard undergraduate student, have developed the new method to search for black holes in the outer solar system based on flares that result from the disruption of intercepted comets. The study suggests that the LSST has the capability to find black holes by observing for accretion flares resulting from the impact of small Oort cloud objects.

Future searches for primordial black holes could be informed by the new calculation. “This method can detect or rule out trapped planet-mass black holes out to the edge of the Oort cloud, or about a hundred thousand astronomical units,” said Siraj. “It could be capable of placing new limits on the fraction of dark matter contained in primordial black holes.”

The upcoming LSST is expected to have the sensitivity required to detect accretion flares, while current technology isn’t able to do so without guidance. “LSST has a wide field of view, covering the entire sky again and again, and searching for transient flares,” said Loeb. “Other telescopes are good at pointing at a known target, but we do not know exactly where to look for Planet Nine. We only know the broad region in which it may reside.” Siraj added, “LSST’s ability to survey the sky twice per week is extremely valuable. In addition, its unprecedented depth will allow for the detection of flares resulting from relatively small impactors, which are more frequent than large ones.”

The new paper focuses on the famed Planet Nine as a prime first candidate for detection. The subject of much speculation, most theories suggest that Planet Nine is a previously undetected planet, but it may also flag the existence of a planet-mass black hole.

“Planet Nine is a compelling explanation for the observed clustering of some objects beyond the orbit of Neptune. If the existence of Planet Nine is confirmed through a direct electromagnetic search, it will be the first detection of a new planet in the solar system in two centuries, not counting Pluto, said Siraj, adding that a failure to detect light from Planet Nine—or other recent models, such as the suggestion to send probes to measure gravitational influence—would make the black hole model intriguing. “There has been a great deal of speculation concerning alternative explanations for the anomalous orbits observed in the outer solar system. One of the ideas put forth was the possibility that Planet Nine could be a grapefruit-sized black hole with a mass of five to 10 times that of the Earth.”

The focus on Planet Nine is based both in the unprecedented scientific significance that a hypothetical discovery of a planet-mass black hole in the solar system would hold as well as the continued interest in understanding what’s out there. “The outskirts of the solar system is our backyard. Finding Planet Nine is like discovering a cousin living in the shed behind your home which you never knew about,” said Loeb. “It immediately raises questions: why is it there? How did it obtain its properties? Did it shape the solar system history? Are there more like it?”