While most of the attention in the Chinese shadow banking system is focused on the Credit Equals Gold #1 Trust’s default, as we first brought to investors’ attention here, and the PBOC has thrown nearly CNY 400 billion at the market in the last few days, there appears to be a bigger problem brewing. As China’s CNR reports, depositors in some of Yancheng City’s largest farmers’ co-operative mutual fund societies (“banks”) have been unable to withdraw “hundreds of millions” in deposits in the last few weeks. “Everyone wants to borrow and no one wants to save,” warned one ‘salesperson’, “and loan repayments are difficult to recover.” There is “no money” and the doors are locked.

The locked doors of one farmers’ co-op… 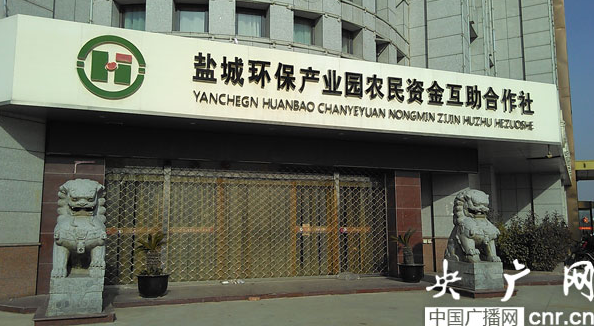 …in recent years, opened dozens of Yancheng local “farmers mutual funds Society”, these cooperatives approved the establishment by the competent local agriculture, and received by the local Civil Affairs Bureau issued a “certificate of registration of private non-enterprise units.”

As savers are promised big returns…

Deposit-taking and lending by cooperatives operated operation, and to promise savers, depositors after maturity deposits not only can get the interest, you can also get bonuses.

But recently things have turned around…

However, beginning in early 2013, Yancheng City Pavilion Lakes region continue to have a number of co-op money people to empty, many savers deposits can not be cashed, thus many people’s lives into a corner.

Salesperson: …the money has been slowly falling and in the end is difficult to ask for money, right? And now there is no money coming in, now people don’t want to save money, and take all the money.

Reporter: But it’s their money, they should be able to…

Salesperson: I know I should [given them money]; however, when the turn started, their is no money, we get cut off and lenders and borrowers took off…

One depositor blames the government (for false promises):

The bank has a deposit-taking his staff, he would say that he is a government action that has the government’s official seal, to give you some interest, as well as the appropriate dividends, because we believe that the government, so we fully believe him , we put the money lost inside, who thought in November, Xi Chu who told us that something was wrong.

Yu Long Zhang: we put all of his certificates of deposit are received out. You are only responsible for the loan out of the money back to the people against. The people’s money has been invested in other projects go, we have to be tracked to ensure no loss of capital assets, can dispose of his assets disposed of, can recover quickly come back.

Reporter: There is a specific timetable yet?

Reporter: When did all of these things can be properly resolved?

So, for the Chinese, their bank deposits have suddenly become highly risky 2 year bonds…