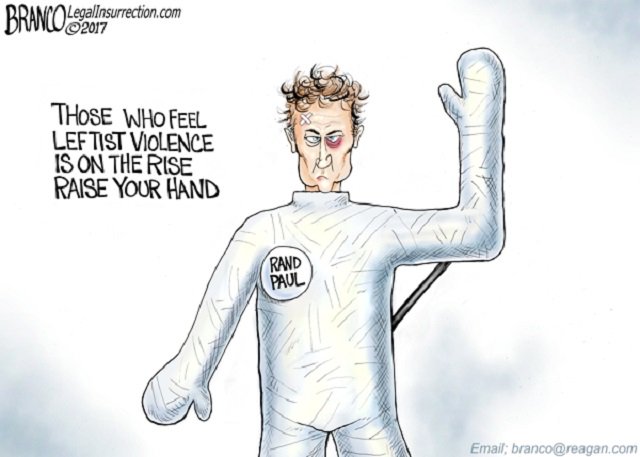 Within the last year, Senator Rand Paul (R-Ky.) has been violently targeted in three separate incidents by unhinged leftists, suggesting he’s their public enemy number one in Congress.

First, he was shot at by a deranged Bernie supporter last July at a Virginia baseball field that left Republican Sen. Steve Scalise critically wounded.

“Everybody probably would have died except for the fact that the Capitol Hill police were there and the only reason they were there was because we had a member of (House) leadership on our team,” Paul told MSNBC.

A few months later, Paul’s Democrat next-door neighbor inexplicably attacked the Kentucky senator outside his home, leaving him with six broken ribs and a lung condition.

I appreciate all of the support from everyone. A medical update: final report indicates six broken ribs & new X-ray shows a pleural effusion

Most recently, another rabid anti-Trump leftist was arrested after threatening to butcher Paul and his family with an axe.

Thank you to the US Capitol Police for their arrest of the man who recently threatened to kill my family and me.

Why is this happening?

Paul is likely the most Constitutionally-principled member of Congress, nearly as consistent as his father, former congressman Ron Paul (R-TX), who was famously known for stubbornly adhering to his classical liberal principles for decades.

Perhaps that answers the question: the left views Paul as an existential threat to its agenda because he champions the Constitution and Bill of Rights eloquently and often.

You’d think the media would be concerned about the repeated violent targeting of a sitting U.S. Senator, but they actually almost seem proud of it!

Rand Paul is not having a good year. https://t.co/A5ry1Blki9

Ron and Rand Paul have always been racist pieces of shit.

I wish @RuPaul could have @RandPaul seat

Lots of ppl hate Rand Paul, he is a hate-able guy. Just bc some nut job threatened him with an axe dosn’t mean the nut-job is a leftest.

Is violence escalating from the left as time goes on? Just ask Paul.