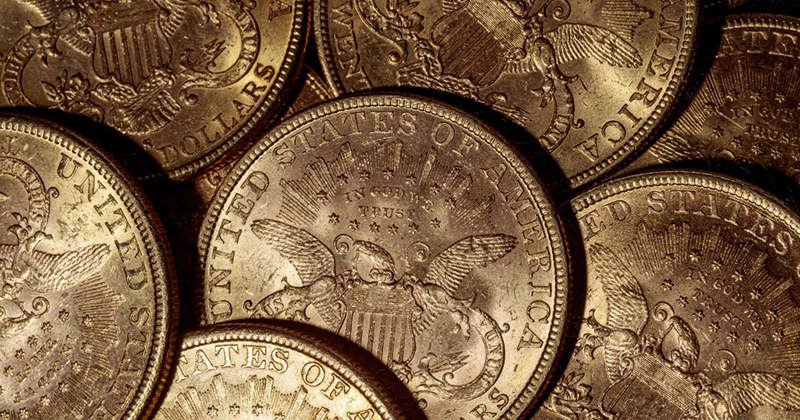 The coin shortage in the United States is becoming quite severe, and a lot of people are deeply concerned about where this might be leading us.

But if you don’t run a business or deal with coins on a regular basis, you may not even know that it is happening.

On Monday, my wife told me that a lot of people on Facebook were talking about this nationwide coin shortage, and then on Tuesday Ricky Scaparo posted a couple of news stories about it, so I decided that I better start looking into this.

Because if this coin shortage is going to be used to push us toward a cashless society, that makes it a really big deal.

Chinese scam pushed 83 TONS of fake gold bars. How does that compare to the TRILLIONS of fake money printed by the Federal Reserve? And, as China has a new strategy to destroy the petrodollar but will the Fed beat them to it?

What I discovered is that this coin shortage has actually been intensifying for quite a few weeks, and on June 11th the Federal Reserve issued a statement in which they announced that coin rationing would begin on June 15th…

Consequently, effective Monday, June 15, Reserve Banks and Federal Reserve coin distribution locations began allocating coin inventories. To ensure a fair and equitable distribution of existing coin inventory to all depository institutions, effective June 15, the Federal Reserve Banks and their coin distribution locations began to allocate available supplies of pennies, nickels, dimes, and quarters to depository institutions as a temporary measure. The temporary coin allocation methodology is based on historical order volume by coin denomination and depository institution endpoint, and current U.S. Mint production levels. Order limits are unique by coin denomination and are the same across all Federal Reserve coin distribution locations. Limits will be reviewed and potentially revised based on national receipt levels, inventories, and Mint production.

It turns out that the rationing has been a lot stricter than many people originally anticipated.  One small bank in Tennessee that would normally use “400 to 500 rolls of pennies each week” is now only being given 100 rolls per week…

“It was just a surprise,” said Gay Dempsey, who runs the Bank of Lincoln County in Tennessee, when she learned of the rationing order. “Nobody was expecting it.”

Dempsey’s bank typically dispenses 400 to 500 rolls of pennies each week. Under the rationing order, her allotment was cut down to just 100 rolls, with similar cutbacks in nickels, dimes and quarters.

Businesses of all types rely on their banks to supply them with the change they need for their customers, and now many of those businesses are being forced to make major changes because of this coin shortage.

In fact, it is being reported that some businesses around the country are starting to put up signs asking their customers to either pay with exact change or with a card…

First to go were masks, then toilet paper and now there’s a national coin shortage. The 7-Eleven on Oakwood Ave. has a sign asking customers to pay in exact change or by card.

According to the First News Now Facebook, several residents across Tioga County, Pennsylvania mentioned that there’s a coin shortage throughout the area.

Some businesses, like Lowes in Mansfield, Pennsylvania, have posted signs in their stores to inform their customers before they check out with their purchases.

Cash temporarily won’t be accepted at Meijer self-checkout lanes due to a national shortage of coins.

Customers who want to pay with bills will have to visit Meijer’s staffed checkout lanes for the time being, according to a company statement. The change is in effect at most of Grand Rapids-based retail giant’s 250 supercenters.

Hopefully this coin shortage will start to subside once this coronavirus pandemic begins to fade, but right now there are no indications that this pandemic is going to fade any time soon.  The mainstream media keeps telling us that the pandemic is getting worse, and the number of new cases being reported around the world has been surging in recent weeks.

From the very beginning of this pandemic, we have been told that using cash is potentially “dangerous” because it could possibly spread the virus.  The following comes from an article by Claudio Grass…

Even in the early stages of the pandemic, when essentially nothing was concretely known about the virus itself or its transmission, the seeds of new fears were already planted by sensational media reports and fear-mongering political and institutional figures. The insidious idea that “you can catch Covid through cash” might have been prematurely spread, but it did stick in most people’s minds. This is, of course, understandable, given the extremely high levels of uncertainty and anxiety in the general public. Wanting to eliminate potential threats was a natural instinct and so was the urge to take back at least some control over our lives, after they’d been suddenly thrown into utter chaos in the wake of the global economic freeze.

Another factor that concretely helped the shift away from physical cash was an entirely practical one. Given the lockdown measures and the new “social distancing” directives that were enforced all over the world, it became difficult to use cash, even if you really wanted to, or had no other means of transaction, as is the case for billions of people. With physical stores being forced to shut down and with more and more online shops offering contactless delivery (either as a choice or as a service requirement), the need for cash very quickly gave way to digital payments.

Of course central banks all over the globe have been encouraging the use of digital payments for a very long time, and so this pandemic has given them a golden opportunity to accelerate that agenda.

Here in the U.S., there has always been a lot of resistance to the idea of a cashless system, but some countries in Europe such as Sweden have almost entirely done away with cash at this point, and China is shifting in the direction of a cashless society at a pace that is breathtaking.

A lot of people like the speed and efficiency of cashless payments, but what people need to understand is that a system that is entirely cashless would allow governments and financial institutions to monitor us, track us and control us like never before.

It has often been said that “cash means freedom”, and the total abolition of physical cash would be a major blow to everyone that still loves liberty.

Unfortunately, the entire world has been steadily moving in a cashless direction for many years, and this pandemic has given opponents of cash a window of opportunity to push us down that road even faster.