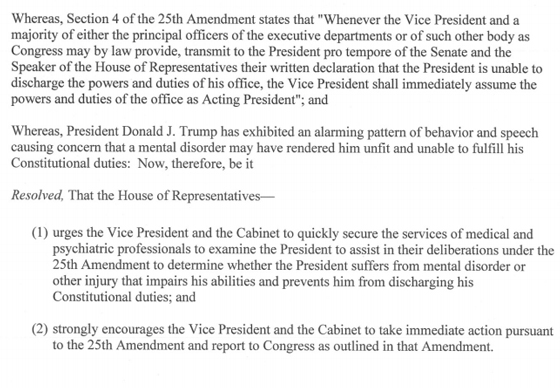 Back in February it was reported by Zero Hedge that Democrats would soon act to remove President Trump under the 25th Amendment, which states in part that a President can be replaced should he be unable to discharge his powers and duties. Such an action would require a vote from the President’s cabinet, but could also be initiated by Congress.

As of today, Trump’s opponents are now actively pursuing this strategy. Asking whether the President has early stage dementia, or whether he is “mentally and emotionally stable,” Congressional Representative Zoe Lofgren (D-CA) introduced legislation that would force the President to submit to a psychological evaluation.

Rep. Zoe Lofgren (D-Calif.) introduced the bill on Friday. Should the results of the said exam be unfavorable, the bill calls for Vice President Mike Pence and members of the Cabinet to remove Trump from office.

“Does the President suffer from early stage dementia,” Lofgren asked in a statement announcing the bill.

“Has emotional disorder so impaired the President that he is unable to discharge his duties,” she continued. “Is the President mentally and emotionally stable?”

Lofgren pointed out that Trump has not yet released a “serious” medical evaluation to the public.

We’re sure that any bi-partisan psychological evaluation panel assembled by Congress in an effort to invoke the 25th Amendment would be completely unbiased and independent.

Last week Trump’s Art of the Deal co-author Tony Schwartz said the President will likely resign by the end of the year.

And if he doesn’t resign, Democrats (and perhaps even Republicans) are lining up for a chance to impeach the President over Russia or charges of obstruction of justice. In fact, the effort to oust the leader of the free world is so strong that the professor who predicted Trump’s Presidential victory now says he will probably be impeached by the end of 2018, and that even his allies will turn on him.

Whatever the case with the current investigations, if the Deep State wants to find something on Trump, they will.

It’s obvious that a broad spectrum attack is taking place and forces on both the left and right want the President out of office.