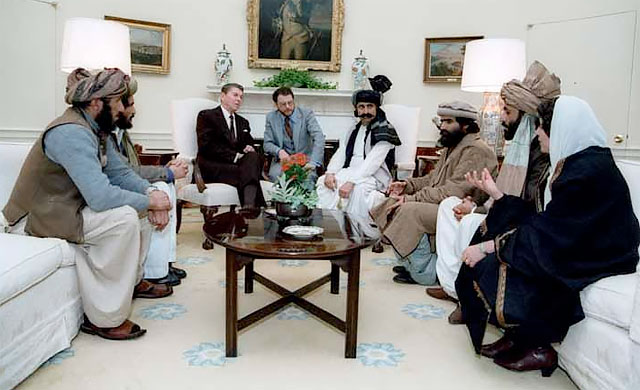 Charles Krauthammer, Fox News and the neocon blogosphere are outraged by a remark made by White House Deputy Press Secretary Eric Schultz.

Schultz said exchanging an Iraqi prisoner for a Jordanian pilot held by the Islamic State is not the same as the swap of five Taliban prisoners for Army Sgt. Bowe Berghdahl.

He declared “the Taliban is an armed insurgency. ISIL is a terrorist group so we don’t make concessions to terrorists groups.”

Krauthammer said in response that the Taliban “slits throats. It attacks buses. It drives car bombs into markets and it’s not a terrorist group.”

The Taliban indeed engages in terror tactics, but what is omitted from the discussion is the fact they learned these tactics from the CIA.

The Afghan Mujahideen, elements that would later become both the Taliban and al-Qaeda, learned “sabotage skills” at Camp Peary, the CIA’s spy training camp in Virginia.

Others were given paramilitary training in the New York area and then sent to Afghanistan with U.S. assistance to join the CIA-supported forces of Gulbuddin Hekmatyar, a drug-running warlord who was known for throwing acid at women dressed in Western clothes and for murdering a fellow student from a Maoist faction at Kabul University.

The program to train and fund murderous tribal cutthroats and defeat the Soviet Union in Afghanistan was called Operation Cyclone. Many candidates were recruited at the al-Kifah Refugee Center in Brooklyn, New York, and were trained by Ali Mohammed, a member of the U.S. Army’s elite Green Berets.

Following the defeat of the Soviet Union, the U.S., Britain, and the Saudis used Pakistani intelligence to create the Taliban.

The U.S. government was well aware of the Taliban’s reactionary program, yet it chose to back their rise to power in the mid-1990s. The creation of the Taliban was “actively encouraged by the ISI and the CIA,” according to Selig Harrison, an expert on U.S. relations with Asia. “The United States encouraged Saudi Arabia and Pakistan to support the Taliban, certainly right up to their advance on Kabul,” adds respected journalist Ahmed Rashid. When the Taliban took power, State Department spokesperson Glyn Davies said that he saw “nothing objectionable” in the Taliban’s plans to impose strict Islamic law, and Senator Hank Brown, chair of the Senate Foreign Relations Subcommittee on the Near East and South Asia, welcomed the new regime: “The good part of what has happened is that one of the factions at last seems capable of developing a new government in Afghanistan.” “The Taliban will probably develop like the Saudis. There will be Aramco the consortium of oil companies that controlled Saudi oil, pipelines, an emir, no parliament and lots of Sharia law. We can live with that,” said another U.S. diplomat in 1997.

Nothing objectionable, that is until the Taliban disagreed with the U.S. on the construction of the oil pipeline in Afghanistan. When Taliban intransigence persisted, “this rationale of energy security changed into a military one,” according to Jean-Charles Brisard and Guillaume Dasquie, authors of Bin Laden, the Forbidden Truth.

“At one moment during the negotiations, the U.S. representatives told the Taliban, ‘either you accept our offer of a carpet of gold, or we bury you under a carpet of bombs,'” Brisard said during an interview in Paris. It should be noted that this threat was made prior to the attacks of September 11.

It is claimed by the U.S. government and its corporate media that “9/11 changed everything.” Indeed, it did — even the truth.

White House Deputy Press Secretary Eric Schultz is correct — the Taliban is engaged in an insurgency. It began after the United States invaded Afghanistan under the false pretense it was gunning for Osama bin Laden and al-Qaeda.

The U.S. had planned to attack the Taliban prior to the attacks on New York and Washington. This was confirmed by Niaz Naik, a former Pakistani Foreign Secretary, and others.

“The wider objective, according to Mr Naik, would be to topple the Taleban regime and install a transitional government of moderate Afghans in its place – possibly under the leadership of the former Afghan King Zahir Shah,” the BBC reported.