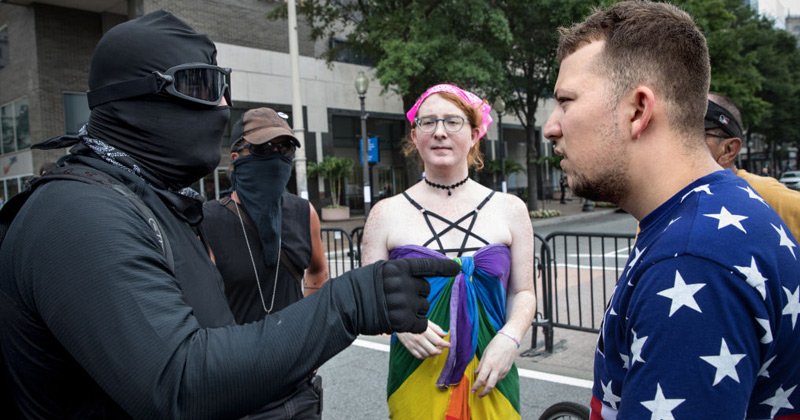 According to the mainstream media, Antifa, neo-Nazis and political “extremists” are set to join forces in a symbolic middle finger to the government of Virginia during a massive pro-Second Amendment rally set to take place in Richmond on Monday.

After Democrats gained a majority in the state’s General Assembly in November, over 100 counties declared themselves Second Amendment sanctuaries.

While the move is clearly unconstitutional, is Northam a “conspiracy theorist” for fearing the possibility of chaos erupting?

Because, according to George Soros’ Media Matters, Alex Jones is somehow wrong for warning Americans about the possibility of violence or a false flag operation being staged at the rally.

“As Virginia gun rally approaches, Alex Jones and his Infowars outlet hype prospect of violence,” their headline reads, setting the stage for Jones to be blamed if anything happens.

Governor Northam also held a press conference on Wednesday where he claimed to have “credible intelligence from our law enforcement agencies that there are groups with malicious plans for the rally that is planned for Monday.”

On Thursday, three individuals associated with an alleged “racist and anti-Semitic group” called “the Base” were arrested by the FBI.

The group was said to be on its way to attend the rally when they were arrested on federal gun charges and for harboring a Canadian citizen who was in the country illegally.

The image of neo-Nazis attending the rally is meant to dismiss patriotic attendees as racists via guilt by association.

On top of that, a Richmond, Virginia-based Antifa group is set to make an unprecedented declaration of solidarity with conservatives by marching alongside them in defense of the Second Amendment.

However, the history of violence associated with Antifa, specifically when pro-Trump groups are present, cannot be ignored.

Will the group mesh with the pro-gun demonstrators or will they clash and possibly turn their weapons on each other?

On the other hand, could Governor Northam send in the National Guard as Virginia Democrat Donald McEachin suggested last month?

No matter the outcome, Alex Jones will be joining fellow American patriots as they stand up to the unconstitutional demands of Democrat politicians.

Listen in their own words as leftists vow to make you a disarmed slave. It is their wet dream that they make you a victim.

In the next video, Alex Jones breaks down the news that Gov. Northam is using Martial Law tactics to infringe on the rights of Virginians.

Matt Bracken, hosting the 4th hour of The Alex Jones Show, brings you all the tips you may need if you plan to attend the Second Amendment demonstration in Richmond, Virginia.