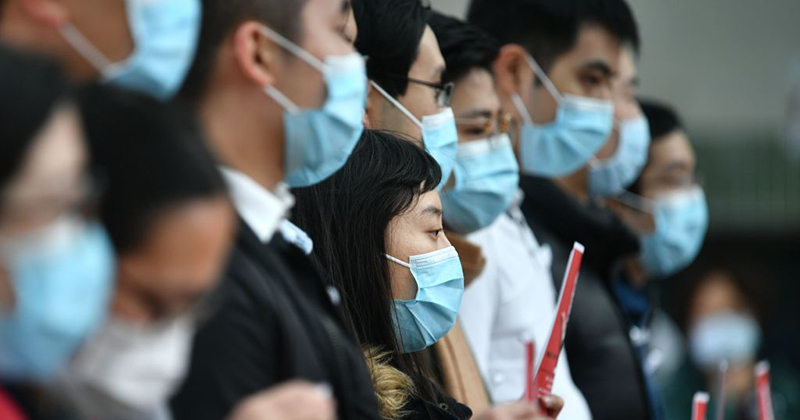 Sometimes we overlook the obvious because we don’t like the implications.  Right now, China is being hit with plague after plague.

As I discussed earlier today, the epicenter for the worst coronavirus outbreak in modern human history is in China, the worst African Swine Fever pandemic ever recorded has wiped out “about two-thirds of China’s swine herd”, and now an outbreak of H5N1 bird flu threatens to decimate Chinese chicken production.

The attention of the entire planet is now keenly focused on China, and it appears that things are only going to get worse in the months ahead.

Meanwhile, the Chinese government has initiated a campaign that is designed to stamp out the Christian faith throughout the entire nation.

Alex calls in from the road to break down the shocking revelations that now prove the Coronavirus was actually man made!

If you are under the age of 18, you are no longer allowed to go to church in China.  Officials all over the country are forcing churches to replace pictures of Jesus with pictures of President Xi Jinping, hymns are being replaced with patriotic songs praising the communist government, and there has even been talk of rewriting the Bible to bring it more into alignment with communist values.

It has been estimated that the number of Bible-believing Christians in China now exceeds the number of Bible-believing Christians in the United States, and obviously a lot of the underground churches did not want to go along with these deeply repressive measures.  So Chinese officials have conducted mass arrests, they have shut down thousands of churches, and Bibles have been publicly burned to send a message to others that may be thinking of attempting to defy the government.

I would use the word “tyranny” to describe what is happening, but it doesn’t seem nearly strong enough.  The following is how the New York Post described the current state of affairs in China…

Catholic churches torn down or denuded of their crosses and statues. Images of the Madonna and Child replaced with pictures of “People’s Leader” Xi Jinping. Signs posted outside evangelical churches forbidding anyone under the age of 18 from entering. The Ten Commandments painted over with quotes from Xi.

These are just some of the ways that the Chinese Communist Party is persecuting Christians in China.

A grieving daughter who is part of the church was arrested in Wuhan, the capital of the province of Hubei where the coronavirus was first detected, while her family was planning her mother’s funeral in October. She was reportedly released two days later, only after the funeral — which prohibited any Christian customs or rituals the family requested — had been held.

“When my father died, village officials threatened to arrest us if we didn’t conduct a secular funeral,” a villager in Henan told Bitter Winter, a magazine covering religious liberty and human rights in China. “We did not dare to go against them. My father had been a believer for several decades. He is persecuted even after death.”

And now a new set of extremely harsh regulations just went into effect on February 1st, and these new rules will make every major decision that a church makes subject to government approval…

On Feb. 1, 2020, new restrictions on all forms of religious activity came into force.

The “Control Measures for Religious Groups,” as the 41 new rules are called, deal with everything from the holding of rites and rituals, to the selection of leaders and annual meetings, to the hiring of staff and the handling of funds. All of these must be reported — in advance, no less — to the comrades at the “Religious Affairs” office for their approval.

In essence, every last shred of religious freedom is being entirely wiped out.

The new regulations require “all religious personnel to support and implement total submission to the Chinese Communist Party”, and Dr. Bob Fu is warning that they will basically make every religious institution in China an arm of the national government…

Added Dr. Bob Fu, leader of ChinaAid, a partner of Save the Persecuted Christians, “The new rule codifies the CCP’s ideological and leadership supremacy over all religious affairs in China. From now on, the Chinese Communist Party becomes the head of church, temples, mosques and other religious institutions.

The CCP will dominate every sphere of religion, from religious doctrines [to] leadership selection, financial management and foreign exchanges. There will be little autonomy and independence left for any religious organizations in China. No independent religious institutions such as house churches will be legally allowed or tolerated for existence unless it’s coerced to join the CCP’s established ‘patriotic religious organizations.’”

In addition, the Chinese carefully monitor church attendance, and thanks to technology that is now easier than ever.

In fact, at many churches people have to line up “for facial recognition checks”before they are allowed to enter…

Some countries have began to use AI and Biometric technologies to track and control religious believers, a leading charity specialising in the persecution of Christians has warned.

There is no doubt that the communist Chinese government has declared war on the Christian faith.

And it is also certainly true that China is now being hit by plagues that are absolutely unprecedented in modern Chinese history.

Could it be possible that there is a connection?

I understand that a lot of people out there will never even consider such a possibility, and that is very unfortunate.

In life, there are always consequences for our actions, and the Chinese government has willingly chosen to brutally persecute Bible-believing Christians.

Chinese officials probably never imagined that God might be watching and that there might be very serious repercussions for trying to eliminate the Christian faith from their society.

Unfortunately, the Chinese communist government is just going to keep doing what they are doing, and that means that those that live under this horribly repressive regime will continue to suffer.