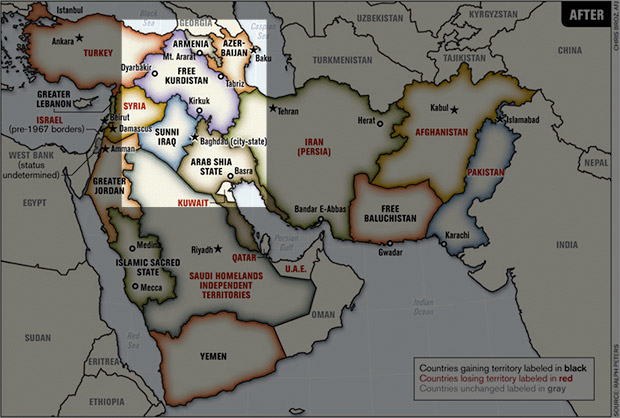 The corporate media reports ISIS in Iraq received many of its weapons as a result of the Iraqi retreat from Mosul. ISIS, however, had plenty of weapons prior to the takeover. Most came from the United States.

The U.S. and Saudi sponsored proxy war in Syria to topple the government of al-Assad provided the terror group with its weapons, according to Michael Knights, the Lafer Fellow at the Washington Institute for Near East Policy who is described by Vox as “an obsessive ISIS watcher.”

“The war gave them a lot of access to heavy weaponry,” Knights told Vox.

Following the overthrow of Libya, the CIA and its partners moved weapons into Syria. The murder of Ambassador Chris Stevens was collateral damage in this operation. The Senate Intelligence Committee report on Benghazi released last September dwells on the failure to protect Stevens and his staff. It also ignores the underlying operation.

Seymour Hersh, the award-winning investigative journalist who was unceremoniously dumped by The New Yorker due to his penchant for exposing uncomfortable truths, explained how the Senate buried information about the CIA and the gun-running operation in Benghazi:

A highly classified annex to the report, not made public, described a secret agreement reached in early 2012 between the Obama and Erdoğan administrations. It pertained to the rat line. By the terms of the agreement, funding came from Turkey, as well as Saudi Arabia and Qatar; the CIA, with the support of MI6, was responsible for getting arms from Gaddafi’s arsenals into Syria. A number of front companies were set up in Libya, some under the cover of Australian entities. Retired American soldiers, who didn’t always know who was really employing them, were hired to manage procurement and shipping. The operation was run by David Petraeus, the CIA director who would soon resign when it became known he was having an affair with his biographer. (A spokesperson for Petraeus denied the operation ever took place.)

The operation had not been disclosed at the time it was set up to the congressional intelligence committees and the congressional leadership, as required by law since the 1970s. The involvement of MI6 enabled the CIA to evade the law by classifying the mission as a liaison operation. The former intelligence official explained that for years there has been a recognized exception in the law that permits the CIA not to report liaison activity to Congress, which would otherwise be owed a finding. (All proposed CIA covert operations must be described in a written document, known as a ‘finding’, submitted to the senior leadership of Congress for approval.) Distribution of the annex was limited to the staff aides who wrote the report and to the eight ranking members of Congress – the Democratic and Republican leaders of the House and Senate, and the Democratic and Republicans leaders on the House and Senate intelligence committees. This hardly constituted a genuine attempt at oversight: the eight leaders are not known to gather together to raise questions or discuss the secret information they receive.

The annex didn’t tell the whole story of what happened in Benghazi before the attack, nor did it explain why the American consulate was attacked. ‘The consulate’s only mission was to provide cover for the moving of arms,’ the former intelligence official, who has read the annex, said. ‘It had no real political role.’

ISIS Gets Weapons From Its Master

In April we reported on the fact the U.S. provides weapons to al-Nusra and other terrorists groups in Syria by way of its allegedly vetted “moderate” mercenaries. Jamal Maarouf, who runs the Syrian Revolutionary Front (SRF) created by the CIA and Saudi and Qatari intelligence, said if “the people who support us [U.S., Saudis, Qataris] tell us to send weapons to another group, we send them. They asked us a month ago to send weapons to Yabroud [a city in Syria] so we sent a lot of weapons there. When they asked us to do this, we do it.”

According to Barak Barfi, a research fellow for the globalist funded New America Foundation, al-Nusra, the al-Qaeda-linked group known for summarily executing Syrian soldiers and other atrocities (including beheading Christians), receives weapons indirectly from SRF.

The professed leader of ISIS, Abu Bakr al-Baghdadi, was instrumental in the creation of al-Nusra. Following a power struggle between the two groups, al-Baghdadi announced the dissolution of Jabhat al-Nusra and the integration of its members into the Islamic State in Iraq and al-Sham, or ISIS.

“ISIS quickly announced its areas of operations publicly and took control of wide areas without facing much resistance, benefitting from the Jabhat al-Nusra fighters who defected to ISIS,” reports al-Monitor. “Some estimates suggest that about 65% of Jabhat al-Nusra elements quickly declared their allegiance to ISIS. Most of those were non-Syrian jihadists. Entire brigades joined ISIS, among them was the Mujahedeen Shura Council led by Abu al-Atheer, whom ISIS appointed emir of Aleppo, and Jaish al-Muhajireen and al-Ansar, led by Omar al-Chechani.”

Earlier this month, Obama’s top foreign policy advisor, Susan Rice, admitted the United States is providing lethal weapons to the “moderates” in Syria, although she did not mention the transfer of these arms to al-Nusra and, we can reasonably assume, other radical Islamic groups.

“We are certainly concerned that the fact that [ISIS] has gotten its hands on so many weapons, both in Syria and Iraq, is a very serious security concern for both countries,” State Department Deputy Press Secretary Marie Harf told reporters recently.

ISIS shows off its weapons.

The Pentagon is also sticking to the story ISIS picked up its equipment from retreating Iraqi security forces.

“They’re driving some of these vehicles, they’re in possession of some of this stuff, but I’d be loathe to tell you that we actually have a really solid sense of what they’ve got,” Pentagon Press Secretary Rear Adm. John Kirby told reporters Friday.

Most of the “stuff” Kirby mentioned came from the United States with the assistance of Saudi Arabia and Qatar and the CIA, with support from MI6, as Hersh notes. It was transferred from stowed caches in Libya. The arms will now be used to enlarge the perception that ISIS is a serious threat requiring direct intervention by the United States, particularly in Syria where the proxy war against al-Assad has stalled.

Back in 2006 Army Lt. Col. (ret.) Ralph Peters “suggested that a reimagining of Middle Eastern and Asian borders along ethnic, sectarian and tribal lines might ease regional tensions,” the Armed Forces Journal reported.

“Syria’s prime location and muscle make it the strategic center of the Middle East,” Robin Wright wrote for The New York Times last September in an article noting Peters’ map of a rearranged Middle East. “Syria’s unraveling would set precedents for the region, beginning next door. Until now, Iraq resisted falling apart because of foreign pressure, regional fear of going it alone and oil wealth that bought loyalty, at least on paper. But Syria is now sucking Iraq into its maelstrom.”

Iraq now appears closer than ever to dividing along religious and sectarian lines. In fact, this was the plan all along. It was previously envisioned by the Bush neocons who penned A Clean Break: A New Strategy for Securing the Realm. The document created by the Study Group on a New Israeli Strategy Toward 2000 called for overthrowing Saddam Hussein and waging a proxy war against al-Assad in Syria.

Prior to the Clean Break document, Oded Yinon wrote The Zionist Plan for the Middle East. It proposed “that all the Arab states should be broken down, by Israel, into small units” and the “dissolution of Syria and Iraq later on into ethnically or religiously unique areas such as in Lebanon, is Israel’s primary target on the Eastern front in the long run.” The destruction of the Arab and Muslim states, Yinon suggested, would be accomplished from within by exploiting their internal religious and ethnic tensions.

ISIS is described as a manifestation of al-Qaeda’s influence. However, it would be more accurate to call it a manifestation of the Pentagon under the influence of the Bush neocons. In 2005, Frank Morales cited a Pentagon document suggesting the creation of P2OG, or Proactive, Preemptive Operations Group.

According to a classified document prepared for Rumsfeld by his Defense Science Board, the new organization – the “Proactive, Preemptive Operations Group (P2OG)” – would actually carry out secret missions designed to provoke terrorist groups into committing violent acts. The P2OG, a 100-member, so-called “counter-terrorist” organization with a $100-million-a-year budget, would ostensibly target “terrorist leaders,” but according to P2OG documents procured by Arkin, would in fact carry out missions designed to “stimulate reactions” among “terrorist groups” – which, according to the Defense Secretary’s logic, would subsequently expose them to “counter-attack” by the good guys. In other words, the plan is to execute secret military operations (assassinations, sabotage, “deception”) which would intentionally result in terrorist attacks on innocent people, including Americans – essentially, to “combat terrorism” by causing it!

In the case of ISIS stimulation was apparently not enough to get the desire result. The terrorist organization was assisted by the CIA and its partners with weapons delivered from Libya to “moderates” in Syria who then transferred the arms to ISIS and other terrorist groups, including al-Nusra.

ISIS may in fact create a brutal caliphate – or it may be bombed back into the Stone Age, a solution championed by Sen. Lindsey Graham and other neocons in Congress.

Either way, the plan to fragment and balkanize the Arab and Muslim Middle East will be realized. The Kurds in Iraq have established a de facto state in response to ISIS and Iran has pledged to help defend Shia Iraqis in the south. All of this activity promotes the plan to unravel the Middle East in a more dramatic and significant way than it was originally unraveled and recomposed by the British more than century ago.