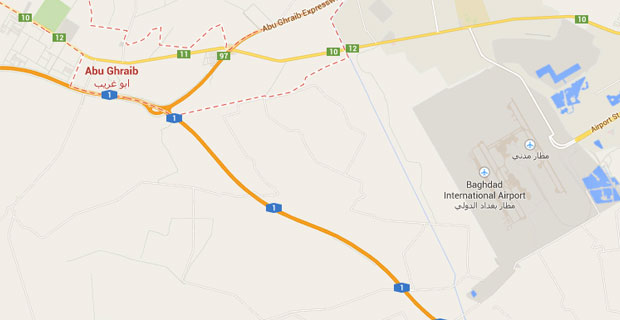 The U.S. embassy in Baghdad may soon fall prey to ISIS.

The embassy – the largest and most expensive diplomatic complex in the world, nearly as large as Vatican City – has maintained a corridor to Baghdad International Airport. In June Obama ordered the deployment of an additional 200 troops to reinforce security at the embassy and airport.

“The presence of these additional forces will help enable the Embassy to continue its critical diplomatic mission and work with Iraq on challenges they are facing as they confront (ISIS),” Pentagon Press Secretary Rear Admiral John Kirby said at the time.

Security at the embassy and airport now face a serious threat from ISIS as it advances within striking distance of Baghdad. Earlier this month the U.S. and Gulf Emirate created terror army advanced as far as the Baghdad suburb of Abu Ghraib, a mere eight miles from the airport. “Daash [ISIS] is openly operating inside Abu Ghraib,” an Iraqi soldier told McClatchy on October 3.

ISIS now not only has the anti-aircraft weapons the Saudis provided to various Syrian rebel factions, but also everything they looted in the takeover of Mosul. That means, just a stone’s throw from the airport, they have shoulder-fired anti-aircraft missiles capable of downing the airliners.

Despite the threat to travel in and out of the airport, the United States is confident it can defend Baghdad.

“It’s not plausible at this point to envision ISIL taking control of Baghdad, but they can make Baghdad so miserable that it would threaten the legitimacy of the central government,” Richard Brennan, an Iraq expert with RAND Corporation and former Department of Defense policymaker told The Associated Press on Saturday.

ISIS domination in Anbar province and its capture of dozen of cities and towns – most recently Hit and neighboring Kubaisa which sent Iraqi troops scrambling in retreat as they abandoned a military base and its stockpile of weapons – put into question the ability of the Iraqi army to defend the capital city.

The situation developing in Iraq is reminiscent of the Fall of Saigon in 1975 as portrayed in an iconic photograph by Hubert van Es (see above). The rapid evacuation of U.S. personnel and a mass exodus of refugees signaled a communist victory and the establishment of nominal authority of the Viet Cong over South Vietnam.

“Our humiliation in Iraq, unless things change drastically, will be even deeper, because our president now is feckless,” writes Thomas Lifson. “One big difference: The Vietnamese Communist Party had no interest in exporting its fight with us to our homeland.”