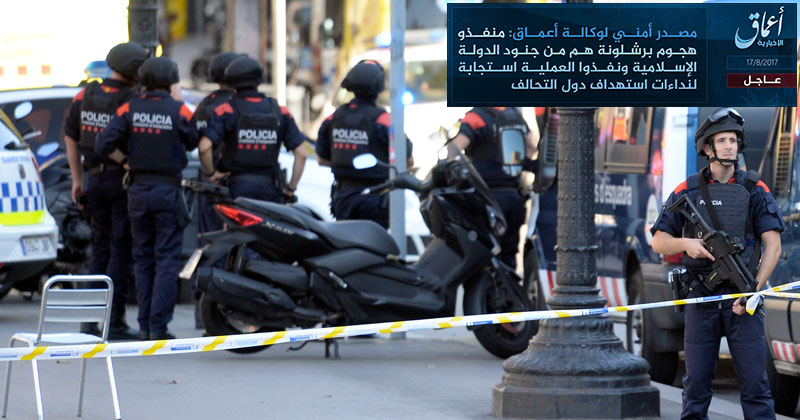 The Islamic State took credit for an attack in Barcelona Thursday that left 13 people dead and more than 100 injured after a van drove into a crowd of pedestrians.

Amaq News Agency, a media outlet linked to the terror group, called the attackers “soldiers of the Islamic State” in a statement released shortly after the incident.

Daesh claims the Barcelona attack, via their Tg channel. pic.twitter.com/71D8ve1g4d

“The perpetrators of the Barcelona attack are soldiers of the Islamic State and carried out the operation in response to calls for targeting coalition states,” the outlet said.

Another image shared online depicts a blood-stained tire with the words “run over them without mercy.”

Although a separate vehicle ran over two police officers in another part of the city two hours after the initial attack, neither authorities nor the Islamic State have thus far linked the two incidents.

According to Spanish newspaper El Pais, two men were apprehended by law enforcement in connection with the attack. One man, 28-year-old Morocco native Driss Oukabir, is said to have rented the van used in the attack – although reports indicate that Oukabir has since contacted police to accuse his brother, Moussa, of stealing and using his identification.

In May of last year the Wafa Media Foundation, a pro Islamic State group, specifically warned of attacks against Spain and other Spanish-speaking countries.

“We are going to kill any Spanish infidel ‘innocent’ if we find them in Muslim lands, and if we do not achieve it in our lands, remember that men and women who follow our message [are] citizens of Spain and all Spanish-speaking countries,” the statement said.

The Islamic State has taken responsibility for other recent attacks throughout Europe including a bombing at a Manchester concert in Britain this year as well as the Nice truck attack in France last year.