It appears that ISIS operatives on American soil are coordinating with an extended network and are preparing direct attacks on soft targets. With school starting for millions of kids across the nation next month and anti-gun proponents working to dismantle any ability for Americans to defend themselves in high-value terrorist target zones, parents should be concerned about what next year will bring.

This morning an extremist made good on Islamic State threats to attack military personnel within the borders of the United States by killing four people at two separate installations. Though the government has yet to confirm Muhammad Youssef Abdulazeez’s ties with the middle east terror group, Infowars reports that just minutes after reports of the shooting began to surface and before law enforcement officials confirmed the identity of the shooter, a Twitter account created within the last 48 hours took credit for the shooting, specifically noting Chattanooga as the target.

A Twitter account claiming to be associated with ISIS terrorists appeared to take responsibility for the Chattanooga shooting Thursday, which took the lives of four Marines outside of a Tennessee Navy and Marine Reserve Center. 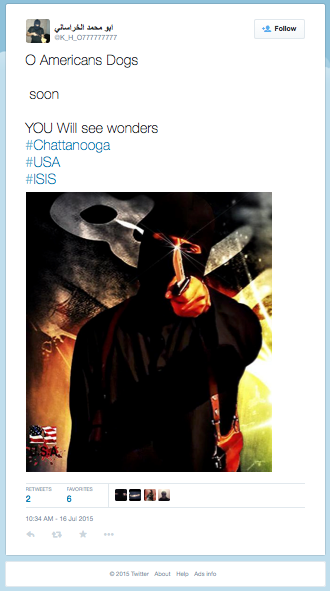 The Twitter account, created just yesterday, appears to have sent out a tweet before Muhammad Youssef Abulazeez was identified as the shooter. The tweet stated that “American dogs” would see “wonders” with hashtags including Chattanooga, USA and ISIS.

The account also sent out several other tweets mentioning the “blood” of Americans while warning of their impending “fate.”

Islamic State threats against America are nothing new, but this is the first time that the organization has publicly linked itself to an attack against Americans with respect to a specific target. That they insinuated Islamic State involvement with their original Tweet only to have the shooter confirmed as an Islamic extermist is further evidence that there operators from within this organization are actively preparing attacks on American soil.

Earlier this year we reported several instances of security threats along the southern border with Mexico, but the Obama administration refuses to confirm that they are credible. Last year a border patrol agent confirmed that the department had intercepted scores of individuals with ties to mid-east terrorist organization attempting to cross the border.

A border patrol agent told the Examiner Wednesday evening that he knew of at least four ISIS insurgents that have been captured this past week.

“There could be more,” he said. “All I know is we (the border patrol agents) know what we see and do, even if the Feds don’t want to acknowledge it.”

“We have stepped up our searches on vehicles, under, over and all-around because we believe they may be trying to bring in explosive bombs and devices,” the agent said.

“Why would we be so cautious if the possibility was not there?”

“We all know who we have captured,” he continued. “As much as they want it quiet, you can’t keep this kind of information a secret very long. We have families here.”

While the argument about illegal immigration rages on, the Other-Than-Mexican border security threat remains unaddressed.

In his book Day Of Wrath, author William Forstchen paints a frightening tale of exactly how Islamic terrorists can cross over the border, compartmentalize their operations, and launch deadly attacks across the country on soft targets such as elementary schools and highways. Though such a blow wouldn’t be as physically devastating as an attack on our power grid with an electro magnetic pulse weapon, the panic and psychological damage it would cause would be unfathomable.

Moreover, it was recently reported that nuclear material was stolen on multiple occasions by Mexican cartel members. The purpose is not clear, but given that Islamic State members are reportedly within 50 miles of the U.S. southern border, and that Mexican cartel members could care less about killing thousands of people, is it possible that some of this material could make its way into the United States in the form of a dirty bomb?

So when a terrorist group like the Islamic State says we “will see wonders,” we’re going to take them seriously.

The problem of course is the notion put forth by a vocal minority of Americans who favor disarmament of the people as a means of resolving gun crime and domestic terrorist threats. Karl Denninger explains how such an idea is completely asinine:

If you remember just recently ISIS said they were going to do exactly this — start attacking people here, in particular military installations and personnel.  Well?

The gunman was killed but here’s the point: A Jackass (like this guy) who wants a gun is going to get one, and he is going to attempt whatever he intends.  The cops (and military) cannot be everywhere with armed security all the time.  But we can be, we collectively are, and we have a 2nd Amendment designed for exactly this sort of situation — both as a deterrent and, if that fails, as a means of defending oneself.

The Second Amendment is both brief and clear — it states that the right of the people to keep and bear arms shall not be infringed.

In light of the fact that ISIS said they were going to come here, they appear to have made good on that threat and we are too politically correct to do anything preemptive about this (nor will we even entertain the debate over whether we should!) we are all left with, as Americans exactly one option:

We must all, now, demand that the Second Amendment be honored as written.  No damned permits.  No bull****.  No kidding.  Right now, right here, today.

If you’re not willing to stand and demand this, right here, right now, today then renounce your citizenship at the nearest consulate and get out.

The murder of Kathryn Steinle earlier this month in San Francisco by a five-time deported illegal immigrant was tragic. It also underscores the importance of securing our border. It should be a wake up call to our Federal government to stop playing games with American lives in the name of politics.

If there really are multiple Islamic State cells operating in America, then the death of these four marines today is only the beginning. The next attack could be coordinated across 20 elementary schools with all of them, naturally, located in gun-free zones.

REVENGE: This Is How You Stop The Islamic State

The Prepper’s Blueprint: Prepare For Any Disaster