Syria appears to be entering an even more chaotic and dangerous period in its civil war now that Israeli officials are concocting potential threats that must be addressed by Israeli intervention. 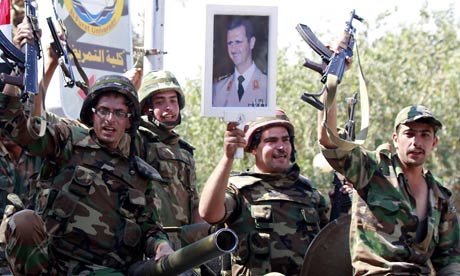 The latest series of stories derives from U.S. and Israeli intelligence circles and suggests that Syria has a “vast stockpile” (Wall Street Journal) or “hundreds of tons” (Rupert Murdoch’s Sky News) of chemical weapons that could fall into the hands of Al Qaeda, Iran’s ayatollahs or God knows who, should Bashar al-Assad’s regime fall. Naturally, Israel would have to protect its interests and intervene to prevent this from happening:

Hundreds of tonnes of Syria’s stockpile of deadly nerve gas could fall into the hands of terrorist groups if the regime of Bashar al-Assad falls apart amid widening concerns that Israel could go to war to try to stop this ‘Doomsday threat‘.

The fact that this would give Israel a further opportunity to tweak its Iranian enemy and ensure the installation of a pro-Israel puppet regime in Syria would of course be entirely incidental and unintentional.

The Sky News report in particular seems to be pure garbage, claiming to know the locations of all chemical warfare labs in the country plus additional storage sites. The report provides no attribution or source, not even an anonymous one. According to Sky, Al Qaeda is not only active in Syria, but has specifically told its member to get their hands on chemical weapons. Again no quotations or source offered to bolster the claim. To hear Sky tell it, missiles filled with Sarin and other potent nerve gases are sitting on launching pads waiting either for Assad to launch them or for the rebels to get their fingers on the button. And of course the rockets can hit “any location in Israel,” the required hysteria inducing phrase harkening back to Saddam’s SCUDs and other visions of Zionist apocalypse.

Israel is deeply concerned that Assad may deliberately give Hezbollah chemical weapons – or that they could end up in the hands of other terror groups. In either case, this could lead to a regional war, Danny Yatom, the former head of Mossad warned.

“The conventional wisdom should be that we cannot exclude a non-conventional attack on Israel. We would have to pre-empt in order to prevent it. We need to be prepared to launch even military attacks… and military attacks mean maybe a deterioration to war,” he told Sky News.

Though on its face, Yatom is advocating for Israeli intervention, it’s also possible he’s playing the not so subtle game of pressuring the U.S. and its allies to act by threatening to act if they don’t do so first. The operative thinking would be saying to the Americans: if you don’t do something, we will; since you won’t like how we’ll handle this, you better take care of it yourself.”

Israel seems to be laying down its marker and saying it too has an interest in determining the nature of the next Syrian regime. Israel will go to very great lengths to ensure it does not have a proto-Iranian regime on its front doorstep, even to the extent of directly intervening. All of which would be devastating not just for Syria, but for the entire region. Israeli “intervention” into affairs in Iran, Lebanon and Gaza has greatly destabilized those countries and wreaked general mayhem. More of this sort of “help” the Middle East does not need.

There are widespread fears that a Gaddafi-style collapse of Syria into chaos, would mean that chemical weapons would spread around the globe.

Yes, of course widespread fears. So widespread we don’t even have to tell you who specifically is afraid and of what. People, we’ve seen this movie before and it was a stinker the first time. Do we need to see it again to know just how bad the sequel is? The original was called Bush Brings You Iraqi WMD. Remember those mushrooms clouds Condi Rice pictured for your visual delectation? Isn’t it a bit like having déjà vu all over again, to paraphrase Yogi Berra?

No less a Hero of Zion than Yair Naveh, IDF deputy chief of staff, is also getting into the act:

Major general Yair Naveh, the deputy chief of staff of the Israeli Defence Force, recently warned a private congregation at a Jerusalem synagogue that Syria’s chemical weapons posed a mortal threat to the Jewish State.

“As for Syria, we all hear the news … (if) Syrians … behave this way to their people it is clear … how they will behave towards us – to our sons – when they get the opportunity against us, with the largest chemical weapons arsenal in the world, with missiles and rockets that cover all of Israel”.

Naveh is also quoted more extensively in this AFP article. If the name sounds familiar, this is the same Yair Naveh who ordered the execution of unarmed Palestinians in contravention of Israeli Supreme Court rulings. News of which was leaked by Anat Kamm to Uri Blau, all of which landed both of them in court (and her in prison), while Naveh earned a promotion for his trouble.

Though WSJ is also a Murdoch media trophy, it has slighter higher standards and actually notes how problematic this entire issue can be:

Because of the faulty intelligence about Saddam Hussein’s weapons of mass destruction that were used to justify the Iraq war, U.S. officials are extremely cautious about using reports of Mr. Assad’s chemical stockpiles to support military intervention.

But note that this is precisely what the WSJ, Sky, and similar media reports are doing: ratcheting up pressure for regime change. The war hawk camp in the Obama administration makes no bones about this and beats the drums of war using every available weapon to do so:

“The regime has a plan for ethnic cleansing, and we must come to terms with this,” the first U.S. official said. “There is no diplomatic solution.”

But the statement simply has no basis either in fact or even in fantasy. But “ethnic cleansing” does have such a nice genocidal ring to it. Just the thing to rouse the quiescent world from its moral slumber.

Unnamed “opposition leaders” (and you know how reliable those folks have been lately) further buttress the ethnic cleansing meme:

Opposition leaders maintain there are increasing indications that the Damascus regime is trying to cleanse strategic areas, such as Hama and Homs, of Sunnis in order to set up an ethnic state that could be defended by the Assads’ Allawite [sic] ethnic minority.

No word on who these opposition leaders are or what the “increasing indications” specifically are. Of course not. What do you expect? Facts, evidence. C’mon.

To be clear, I harbor no affection for Assad and his regime. If there was an effective way to end his rule and guarantee the Syrian people would have a genuine representative government–I’d be all for it. But as it is, Syria is likely to get a domestic version of Ahmad Chalabi, rather than a real Syrian nationalist patriot to run its government. At least, that’s what I fear will happen if the west and Israel try to cast their typical spell on the country, bringing the “birth pangs of a new Middle East” as Israel did to Lebanon in 2006 (remember Condi’s infamous line?).