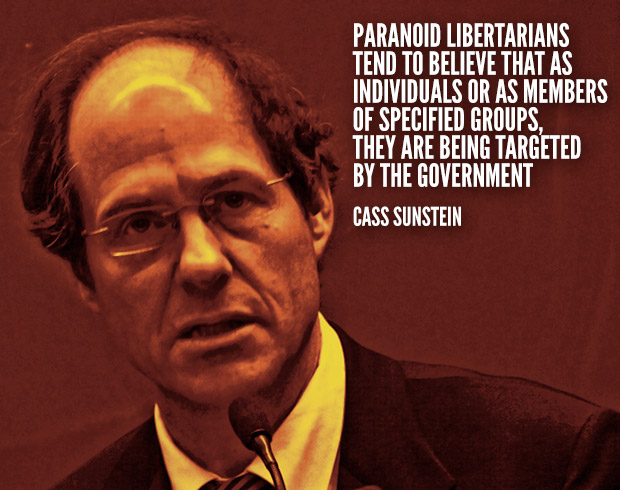 Cass, Cass, Cass…why do you serve up such softballs?

1. Psychiatry.a mental disorder characterized by systematized delusions and the projection of personal conflicts, which are ascribed to the supposed hostility of others, sometimes progressing to disturbances of consciousness and aggressive acts believed to be performed in self-defense or as a mission.

2. baseless or excessive suspicion of the motives of others.

Cass Sunstein apparently believes that speaking truth to power and exposing the lies in government is paranoid behavior:

Are there lies buried in the allegations of these gentlemen?If Snowden is lying, why is Obama pretending to act? These gentlemen have certainly been ridiculed by the mainstream and the politicians; however, I have not read a refutation of any meaningful portion of the government abuses as exposed.

Wilentz claims that far from being “truth-telling comrades intent on protecting the state and the Constitution from authoritarian malefactors,” they “despise the modern liberal state, and they want to wound it.”

Why not both truth-telling and a desire to wound the modern liberal state?If, in fact, the accusations are correct, isn’t a little reputational wounding in order?Should not such a state, and the actors behind it, be despised?

Sunstein moves beyond the three named “paranoids,” and to the larger group of libertarian paranoids.He identifies five characteristics of this breed:

The first is a wildly exaggerated sense of risks — a belief that if government is engaging in certain action (such as surveillance or gun control), it will inevitably use its authority so as to jeopardize civil liberties and perhaps democracy itself.

One need look no further than events in Boston after the marathon bombing.Civil liberties were more than jeopardized – they were ignored.Or what of reports that data from the massive NSA surveillance system is subtly handed over to prosecutors to be used in convicting defendants of non-national-security crimes?

What of a Federal conviction rate well over 90%?For a government that fails at almost every endeavor, how is it possible that it is so successful at this one?What of the highest incarceration rate in the world?Higher than Russia, and six times higher than Canada?Are Americans just more criminal than residents in every other country?

In practice, of course, the risk might be real. But paranoid libertarians are convinced of its reality whether or not they have good reason for their conviction.

Wait a minute, Cass.If “of course, the risk might be real,” how do you point to paranoia in the minds of those who see the risk?

The second characteristic is a presumption of bad faith on the part of government officials — a belief that their motivations must be distrusted.

This one is a whopper.Let’s start with the non-libertarian critiques of just a few American military actions:

1) Lerone Bennett, Jr. (a black American, to get a red herring out of the way) questions Abraham Lincoln.

2) America’s adventures in Cuba and the Philippines were started under false pretenses.

4) The need to drop atomic bombs to end the war was a lie.

5) The pretense to escalate in Vietnam was a lie.

What of the “narratives at variance with the facts” (to quote a wonderful line by Mr. Rozeff)?Just to name two: JFK and September 11.

If their motives can be trusted, why do they need to lie their way to their objectives?Why have they developed systems so effective at spreading fairy tales?

The third characteristic is a sense of past, present or future victimization. Paranoid libertarians tend to believe that as individuals or as members of specified groups, they are being targeted by the government…

Specified groups have been targeted many times in the past.What of slaves at the founding?American Indians?Japanese Americans during World War II?Minorities through the drug war?Wealthy taxpayers?Are libertarians – critics of government power – wrong to feel some concern in this regard?

The fourth characteristic is an indifference to trade-offs — a belief that liberty, as paranoid libertarians understand it, is the overriding if not the only value, and that it is unreasonable and weak to see relevant considerations on both sides.

What is the “both sides” of this?is there some form of liberty on the more side of liberty?There can only be considerations to weaken liberty, if liberty is the standard.

Sunstein uses such language to feign balance – there is a position in the middle that the so-called wise government leaders honestly seek to find.In any compromise between food and poison, and all that….

The fifth and final characteristic is passionate enthusiasm for slippery-slope arguments. The fear is that if government is allowed to take an apparently modest step today, it will take far less modest steps tomorrow, and on the next day, freedom itself will be in terrible trouble. Modest and apparently reasonable steps must be resisted as if they were the incarnation of tyranny itself.

This is the entire history of the republic.The slope has been slippery ever since July 4, 1776.

Try to identify significant incidents in the rollback of state power – absent at the conclusion of major wars, which as Robert Higgs documents results in rollbacks, but never to pre-war levels; a ratchet effect.

I can think of a couple such events (the end of the first two banks of the United States come to mind).However, to describe these as anything other than pebbles on the double-black-diamond downhill slope representing the erosion of personal liberty in the United States would be an exaggeration.

Sunstein ends with his softer, gentler side:

In some times and places, the threats are real, and paranoid libertarians turn out to be right. As Joseph Heller wrote in “Catch-22,” “Just because you’re paranoid doesn’t mean they aren’t after you.”

Societies can benefit a lot from paranoid libertarians. Even if their apocalyptic warnings are wildly overstated, they might draw attention to genuine risks, or at least improve public discussion.

The mentions (and obligatory attacks) on libertarian thinking and Austrian economics is on the rise in recent days and months.The dialogue is slowly shifting from the false debate of democrat vs. republican or liberal vs. conservative to one of establishment vs. libertarian / Austrian.The establishment can no longer get away with merely citing Hayek.They have had to address Mises – even Rothbard can no longer be ignored.

The recent shift can only be tied to the successes of Ron Paul – of course, built on a foundation of Mises, Rothbard and others.It is too bad, just as the dialogue is shifting our way, too many milquetoast libertarians desire to jump on the mainstream bandwagon.