The government says there is no specific threat to the Super Bowl this weekend in Arlington, Texas. On the other hand, it warns that al-Qaeda “and other similar groups remain interested in carrying out attacks during such high-profile events,” according to the Associated Press. Examples provided include the 1972 and 1996 Olympic games in Munich and Atlanta.

“Tight security around the massive Cowboys Stadium is likely to deter attacks at the actual event. However, this makes other less secure targets, such as nearby hotels and restaurants, more appealing for determined terrorists, according to a government intelligence assessment obtained by The Associated Press. One concern would be a device exploding at local businesses or parking lots.”

If the track record of al-Qaeda is any indication, the public has little to worry about. The underwear and Times square bombers were dismal failures. In numerous other cases, the FBI was responsible for motivating dim-witted patsies who posed absolutely no threat to the public but were depicted by the corporate media as insidious terrorists bent on murder and mayhem.

The Super Bowl is merely another high profile event exploited by the government in order to acclimate the public into accepting troops on the streets and the militarization of local cops, firefighters, and first responders.

Posse Comitatus is now officially dead. The distinction between local police and emergency workers and the U.S. Army no longer exists. The DHS “see something, say something” program encourages average Americans to rat out their fellow citizens.

“For the second year, Homeland Security Secretary Janet Napolitano visited the host city to tour the Super Bowl stadium and review the NFL’s security plans. The federal government designates the Super Bowl as a Level One security event, which makes more money and resources available to secure the area,” reports the Associated Press. “During a news conference Monday, officials urged people to report any suspicious activity.”

Last month the Department of Homeland Security’s “see something, say something” program resulted in the lockdown of a Missouri Walmart after police received a report of an armed man acting erratically in the parking lot.

“The individual was talking on a cell phone at the time of the incident. It’s likely that is the object the passerby identified as a gun,” the Kirksville Daily Express reported. 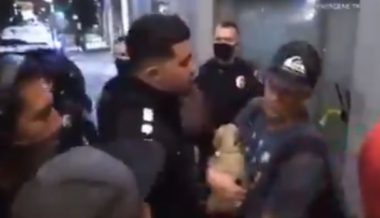