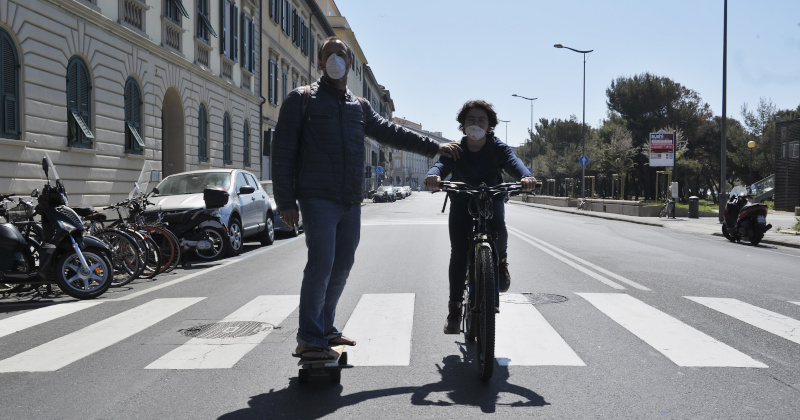 Italy is reporting its lowest number of new coronavirus deaths in three weeks and officials say hospitalization, including the number of patients admitted to intensive care, are also down.

Italy has been Europe’s COVID-19 hot spot with more than 156,000 confirmed cases overall. But some Italian experts say the actual number may be much higher because of the high rate of fatalities in nursing homes where many of the patients were not tested before they died.

The Associated Press, which has kept its own count, reports the number of coronavirus deaths in U.S. nursing homes has jumped since the start of April to more than 3,300. But just like Italy, the true number may never be known because of patients dying before they could be tested.

Dr. Deborah Birx of the White House COVID task force believes testing in facilities for the elderly should be a priority.

“We need to really ensure that nursing homes have sentinel surveillance. And what do I mean by that? That we’re actively testing in nursing homes, both the residents and the workers, at all times,” Birx said.

Back in Europe, France is also reporting a drop in coronavirus deaths and Spanish officials are letting construction and other industrial workers return to their jobs on Monday after a two-week shutdown. But Spanish stores, except pharmacies and food stores, will continue to be closed and anyone who can work from home are still being told to do so.

Turkish Interior Minister Suleyman Soylu handed in his resignation Sunday after a two-day coronavirus-related curfew across the country took Turks by compete surprise.

The government announced the curfew late Friday just two hours before it was to go into effect, sending thousands of Turks pouring into the streets and packing stores to stock up. Many left their houses without face masks.

“Responsibility for implementing the weekend curfew decision, which was aimed at preventing the epidemic, belongs entirely to me,” Soylu tweeted.

Turkey has ordered only scattered lockdowns since the coronavirus pandemic reached there.

“Our most important sensibility is the continuation of the supply of basic needs and ensuring the uninterrupted continuation of production to support exports,” Erdogan said last week. “Turkey is a country which in all conditions and circumstances must maintain production and ensure that the wheels (of production) carry on turning.”

The government has urged people to avoid too much mobility and carry out what Erdogan has called your “own state of emergency.” But he has said stronger measures would be taken if the outbreak in Turkey does not subside.

In New York City, there is still no decision on whether to keep public schools closed for the rest of the academic year.

The city has the nation’s largest public school system. Mayor Bill de Blasio and New York Governor Andrew Cuomo have been squabbling over who must make the decision.

De Blasio says the decision is his and said schools will stay shut. Cuomo says he is the one to decide.

The city school system has been conducting virtual classrooms for the last month, but some school officials say some teachers and students are having a hard adjusting.

The Sri Lankan government is ordering that anyone who died or suspected of dying of coronavirus be cremated “for the purpose of prevention of any potential biological threat.”

The order is certain to upset the island’s minority Muslims who say under Islamic law, bodies must be buried, not burned.

But the head of the Sri Lanka Muslim Congress, Rauff Hakeem, is asking Muslims to remember that these are not ordinary times on Buddhist-majority Sri Lanka or anywhere else.

Israel’s former chief rabbi Eliyahu Bakshi-Doron has died of the coronavirus. He was 79. He served as chief rabbi for Sephardic Jews from 1993 until 2003.

Despite his involvement in a scandal surrounding fraudulent college degrees for police officers, he remained a popular and respected cleric,

“His essence was wisdom, tolerance and love for the people and the country,” Prime Minister Benjamin Netanyahu said.

He was best known as a member of the Goodies comedy team and the BBC radio panel game I’m Sorry, I Haven’t a Clue.