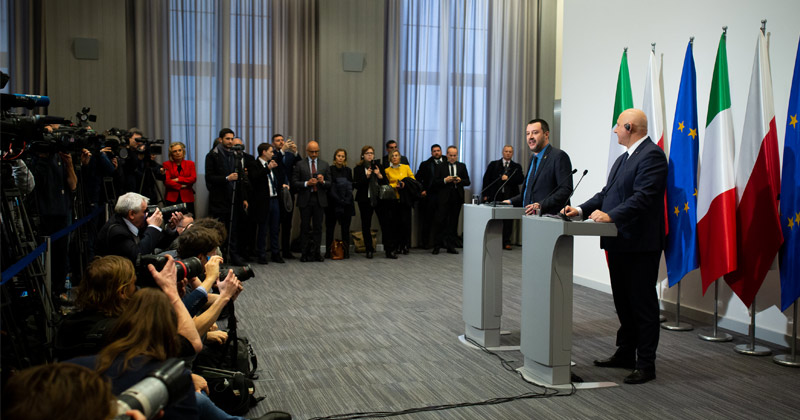 As an increasingly overbearing European Union tries to force its agenda and values on member states that have embraced a more conservative, populist or anti-immigration tact – be it through Article 7 threats against Hungary, a rule-of-law investigation into Poland’s ruling party or its threats of an excessive debt proceeding against Italy – leaders of these states are finally banding together to try and push back against Brussels.

According to Reuters, Italy’s far-right Deputy Prime Minister Matteo Salvini is planning to meet with the leader of Poland’s ruling party, Jaroslaw Kaczynski, on Wednesday to discuss the possibility of creating a “eurosceptic alliance” that will participate in the European Parliamentary elections in May.

The meeting is part of a broader plan by eurosceptic governments that Reuters said could “fundamentally shift the direction of the European Union after the elections.” Salvini’s visit to Warsaw was organized by Polish Interior Minister Joachim Brudzinski.

“(The election) will show whether the eurosceptic voices within Europe are on the rise or if the rise has been curtailed for the moment,” said Michal Baranowski, the head of the German Marshall Fund’s Warsaw office.

Salvini, the leader of Italy’s anti-immigrant League Party and one of two men who are effectively running the country (along with M5S leader Luigi Di Maio), has repeatedly criticized the EU and warned that the May elections are important for creating a “reformist” bloc that he hopes can change Brussels from within. He has even gone as far as to hint that he could be a candidate to lead the European Commission.

“Someone has betrayed the European dream,” Salvini told a League rally in Rome last month. “We will provide the blood for a new European community based on respect, work, growth and equality.”

Kaczynski has said that Poland (which, as Reuters notes, is the biggest beneficiary of EU infrastructure funding) should retain its membership in the bloc, which it joined in 2004. But he wants reforms to bring more power back from Brussels to national capitals.

As Reuters points out, should Poland join forces with a bloc of Eurosceptic parties united by Salvini, it could stand to benefit Poland. To be sure, Poland has recently backed down from some of its more controversial measures, including a law that forced judges into early retirement. That law had ignited widespread indignation across the bloc.

Salvini met other potential allies last year, including Hungary’s Prime Minister Viktor Orban, in an effort to form a cohesive eurosceptic grouping at the EU level.

Salvini could try to unite the Europe of Nations and Freedom bloc, to which his League belongs, with the European Conservatives and Reformists group which includes PiS to create a single, powerful eurosceptic force in the EU Parliament.

A tie-up with Salvini’s grouping could ensure a powerful voice for PiS in the next European Parliament, especially as Britain’s Conservatives will leave the European Conservatives and Reformists grouping after Brexit.

But PiS has also been trying to dilute its eurosceptic reputation ahead of Poland’s own parliamentary election due in the autumn, recently agreeing to reverse a law criticized by the EU that had forced Supreme Court judges into early retirement.

If there is one potential obstacle to closer ties between Italy and Poland, it would be their dramatically different views about Russia. Salvini is one of the most unabashedly pro-Kremlin leaders in Europe, while Poland’s ruling party remains deeply distrustful of Moscow.

Still, if eurosceptics find a way to organize to maximize their leverage in the European Union Parliament following the election, it could open the door to a forced rollback of the unpopular pro-immigration policies and austerity pushed by Brussels that have helped trigger the swell in populist support.