UPDATE 2: In an act of political suppression, the latest mirror of our powerful report on It’s A Wonderful Life has been taken down by Youtube and the video sharing site is systematically removing uploads of our report by hand. This is all the more evident considering that the full version of It’s A Wonderful Life has been available on YouTube for almost two years. If automated “bots” were taking down our report due to bogus copyright claims, they would have removed the full version long ago under a more legitimate claim. Watch the powerful report for free in high quality at PrisonPlanet.tv.

This is purposeful censorship of our report.

Our video report is being suppressed because the banks do not want people to realize that the movie exposes real, modern-day bankster behavior.

The central banks would rather maintain the illusion that prosperity only comes from centralized planning by a tiny elite and worthless paper money forced upon the population.

This is unprecedented censorship and a gross attack on the First Amendment. The central banks want you to stay asleep and believe that it is a wonderful life under their cartel while they strip mine countries across the planet.

We will definitely air the report again on the Friday edition of the Alex Jones Show.

See below for mirrored versions. We are leaving the old version that has been censored lower down on this page for documentation. Also, you can watch it for free at PrisonPlanet.tv.

UPDATE: Our Infowars Nightly News free-speech protected analysis of the film It’s A Wonderful Life was taken down by YouTube after only 24 hours. Infowars follows a high standard of copyright recognition developed through many consultations with various lawyers. The censorship of our review is a gross misappropriation of copyright law, which allows companies outside of court to claim copyright infringement on something that clearly isn’t a violation. Our review was clearly a political analysis showing short clips of It’s A Wonderful Life and tying them into current bankster behavior operating through the Federal Reserve, the IMF and the World Bank. 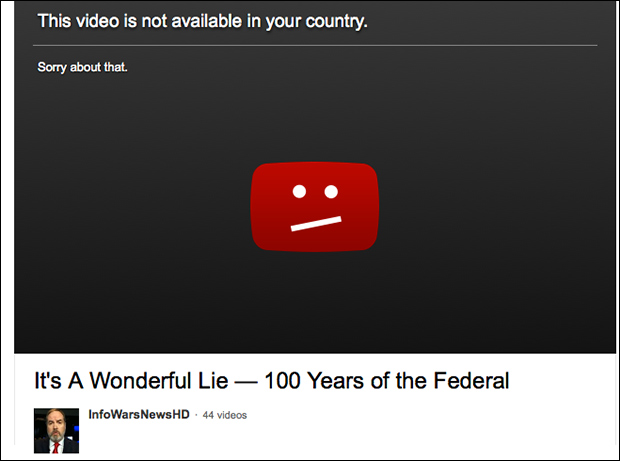 This is a great example of how CISPA and SOPA would legalize this misappropriation of copyright enforcement that these companies are currently engaging in.

Videos on Youtube are being taken down completely because of mere accusations that they violate copyrights, regardless if the copyright claim is completely unfounded and bogus.

This was a pure political move meant to censor our powerful report exposing the truth on the fractional-reserve, fiat banking system. The full version of It’s A Wonderful Life has been available on YouTube since Feb. 2012 and has over 700,000 views, but YouTube has not taken it down. That’s because the real agenda is not copyright enforcement but rather it’s about censoring the truth and protecting the global cartels within the state-corporate nexus.

We aired our review on the Dec. 24 edition of Alex Jones Show and on the Infowars Nightly News and it is clearly covered by fair use because it analyzes a cultural phenomenon and its historical roots. It’s a wonderful life – for the banksters that brought our country under so much tyranny that could never exist under a system of sound money.

Because our film review is so effective, they took it down. But here it is again in full:

Mr. Henry F. Potter, the president of the Building and Loan Association in the 1946 film It’s a Wonderful Life, has very striking similarities to the modern day banksters working through the Federal Reserve to sap the nation’s wealth.

As we look back over the past hundred years, America has experienced the Great Depression, multiple recessions, stagflation and the loss of 99% of the dollarʼs purchasing power – none of it wouldʼve been possible without the Federal Reserve, creating bubbles and bursting them, enslaving us with debt and destroying our purchasing power and our ability to save through inflation.

Yes, itʼs been a wonderful lie — for the banksters.

And many Americans are left like George Bailey. Facing the collapse of their dreams and financial ruin.

There are striking parallels in Frank Capraʼs Itʼs a Wonderful Life to lies and tricks of the modern banker elite. Human nature doesnʼt change and the greedy elite of 1913 and 2013 look much like Potter.

Please spread the message and make this film go viral.