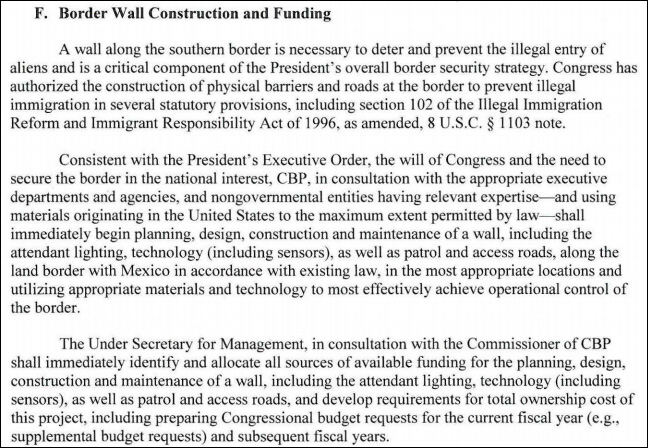 A memo from the Department of Homeland Security calls for the immediate construction of a wall on the southern US border with Mexico.

Section F of the 13-page memo, entitled, “Border Wall Construction and Funding,” details several orders to begin assembling the barrier, as well as how the administration intends to deal with costs.

The memo also notably includes a clause which orders construction materials to be acquired from US manufacturers “to the maximum extent permitted by law.”

Consistent with the President’s Executive Order, the will of Congress and the need to secure the border in the national interest, CBP, in consultation with the appropriate executive departments and agencies, and nongovernmental entities having relevant expertise-and using materials originating in the United States to the maximum extent permitted by law-shall immediately begin planning, design, construction and maintenance of a wall, including the attendant lighting, technology (including sensors), as well as patrol and access roads, along the land border with Mexico in accordance with existing law, in the most appropriate locations and utilizing appropriate materials and technology to most effectively achieve operational control of the border.

Throughout the 2016 presidential election, Trump made the issue of building a southern border wall central to his political campaign, with fervent supporters across the country chanting, “Build the wall!” at many of his rallies.

“A nation without borders is not a nation. Beginning today, the United States of America gets back control as it gets back its borders,” Trump declared after signing the executive order last month.

“The purpose of this order is to direct executive departments and agencies to deploy all lawful means to secure the nation’s southern border with Mexico, to prevent further illegal immigration into the United States, and to repatriate illegal aliens swiftly, consistently, and humanely,” the administration writes.