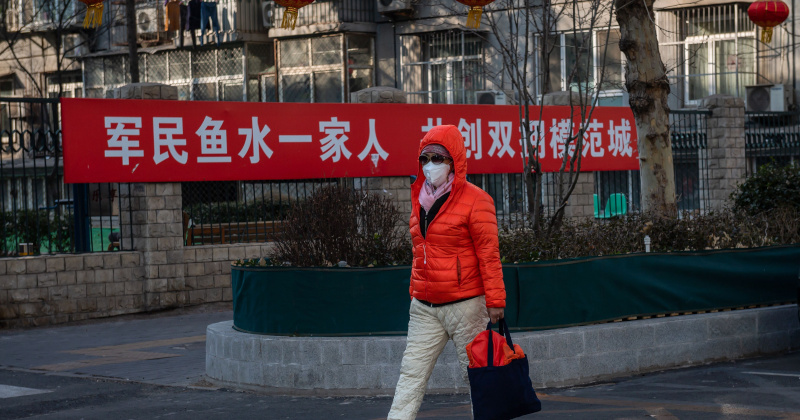 As the US prepares to begin the emergency evacuation of more than 200 Americans living in Wuhan, several Americans have refused seats on the flight to stay behind and stick out the “devil virus” outbreak with loved ones, family and friends.

As we reported yesterday, the Boeing 767, with about 230 seats, is preparing to depart from Wuhan Tianhe International Airport on Tuesday (though ironically it’s set to land in California, the state with the most confirmed coronavirus cases in the US).

It’s expected to be the first of several evacuation flights as the US government moves to get all of its citizens out of the virus-plagued city.

However, there are a handful of Americans who are refusing the evacuation, mostly because they have Chinese spouses or children who wouldn’t be allowed on the flight, or because they’re reporters covering the situation on the ground.

But the AP found one American in Wuhan who, despite not having a family or any professional reason to stay, has decided to hunker down and stick it out with his Chinese girlfriend.

As the death toll in the city surpasses 100, San Francisco native Doug Perez says he’s staying behind, despite harboring serious concerns for his safety. Over the past week, Perez, 28, and his girlfriend have hunkered down in their apartment, only leaving to pick up supplies.

Recently, Perez and his gf got into a heated argument about whether they should visit a local supermarket, or just order food. She won, but unfortunately it appears that food deliveries have been cut off.

When he tried to leave his apartment compound last week, Perez said a guard stopped him and made him turn back, making him feel like a prisoner in his own home.

The day the lockdown was announced, Perez and his girlfriend got in a fight – “a plate was destroyed” – over whether to venture to a supermarket to buy food. His girlfriend, who doesn’t want to be named, won the argument, and the couple began ordering food online.

The streets went quiet. They stay in every night, spending hours a day on social media checking up on the latest news and fielding calls from worried relatives.

On Monday evening, guards barred him from leaving his apartment compound, leaving him wondering what’s next.

“That’s kind of dawned on me, like how bad this could get,” Perez said. “Who knows what will be next week. Will it be police, will it be soldiers? Will we physically not be able to leave our building?”

Japan, South Korea and France are also planning evacuations. A report in a UK tabloid claimed that Beijing has “blocked” the UK from airlifting its citizens out of Wuhan as the UK government comes under increasing pressure to get them out.

Another American – a woman who declined to be identified for fear of harassment – said she has chosen to hunker down and stick it out because she has a cough and believes she would be quarantined by Chinese authorities if she even enters the airport.

Even those Americans who have accepted the offer of a ride out of the country are struggling to figure out how they’re going to make it to the airport amid the lockdown, which has suspended all public transit and even private cars traveling on city streets.

One American woman with an eight-year-old daughter managed to find a ride. But others might not be so lucky.

But for Priscilla Dickey, 35, from South Burlington, Vermont, trying to get on the plane was a no-brainer because of her 8-year-old daughter, Hermione, who she worries could be vulnerable to the virus. On Monday afternoon, the consulate phoned Dickey and told her she and her daughter had seats.

After packing a bag with three shirts and a pair of pants, Dickey stayed up until two in the morning trying to figure out how she would get to the airport amid a transportation shutdown. She “stress cleaned” her apartment in the morning, she said, before getting in an airport-bound car, waves of emotion washing over her.

“I was feeling guilt,” Dickey said, speaking by phone on her way to the airport. “Excitement, guilt, stress — all of it.”

But even amid a terrible crisis, there can be moments of levity, as Perez explained.

But despite the worsening conditions, Perez says there are moments of hope. On Monday evening, residents set off fireworks, and cries of “Go Wuhan!” echoed around his apartment compound.

Perez joined in, shouting “We are all Wuhan people!” His girlfriend cheered and his dog barked, making them feel they were “all in this together.”

“We needed that,” Perez said. “It lifted us up a bit and gave us some hope.”

Afterward, he and his gf presumably went back to assiduously avoid contact with other humans for fear of being infected.