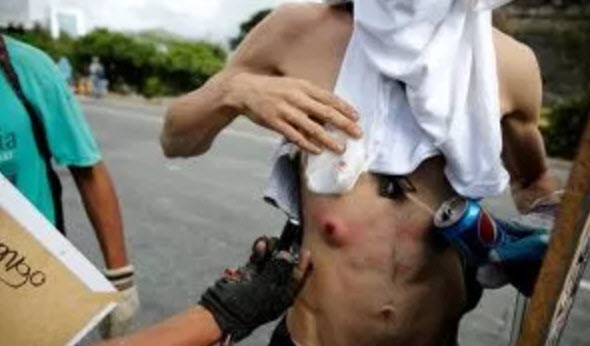 As protests against Venezuela’s “democratic socialist” government roll into their third month, Dr. Henrique Montbrun, who oversees the triage post in the municipality of Baruta, says the violence in the country has reached unprecedented levels. “It’s madness,” he says.

As more people take to the streets to demand their freedom back in a nation where tyranny took a firm hold shortly after the election of self-proclaimed socialist, Nicolaus Maduro, the country descended into complete government control, and the only people with money, are now those in the government.  Socialism is fair that way; as no system more equally distributes poverty, except maybe communism. But a pattern is now emerging in the battle for basic human rights and minimal freedoms.

The clashes between the demonstrators and security forces are entering their third month, and even doctors say that they can no longer predict the type of violence to prepare for, but they can predict that there will be increasing numbers of injuries and death.

The only pattern emerging is one of even more violence.

Dr. Montbrun says that the injuries sustained at the beginning of protests were largely superficial, usually buckshot wounds. More recently, however, as protesters have gone up against an increasingly desperate government, protestors have been treated for 5cm-deep holes caused by metal marbles shot at close range.

“Violence doesn’t surprise me but the level of hatred security forces are showing towards average citizens and the use of non-conventional weapons like loading tear gas canisters with nails and marbles does take me aback,” Dr. Montbrun says.

According to the public defender’s office, 67 people (including minors, students, passersby, and national guards) have died during or as a result of the protests. On Wednesday, an 18-year-old died of an explosive-related wound to the chest and a national guard was murdered causing a rash of even more anti-government protests. And yet, despite the escalation of violence, protesters remain in the streets trying to demand their freedom.

“I am not afraid,” says Rosmery Indare, 19, who arrived barely conscious at the triage post. “They threw several gas bombs and we all ran. I tried to go into a nearby mall but most shops had closed and I was cornered.”

Rosmery described how two national guards clubbed her in the legs and knees while threatening to jail her. “They’re not going to stop me from marching,” she says.

“I haven’t had a chance to enjoy my country because they stole it from us but this time, I am sure, we will recover [it].” –The Guardian

As the Venezuelan government continues to starve its own people through regulations and kill for protesting their own starvation, the resolves of those living under the oppression of socialism seem to continue to harden. Venezuela destroyed their own economy with socialist policies, which are carryovers from Hugo Chavez’s reign of terror. With inflation rising by 800% in 2016 while the economy shrank by 18.6% over the same period, according to the central bank, crime has soared with over 28,479 homicides in 2016.  That leaves Venezuela with one of the highest murder rates in the world, and the worst economy. Finding food or medicine has become nearly impossible, except for the very few who can afford black market prices and the risk of death.

Unfortunately, it looks as though Venezuela’s situation will worsen before it improves.