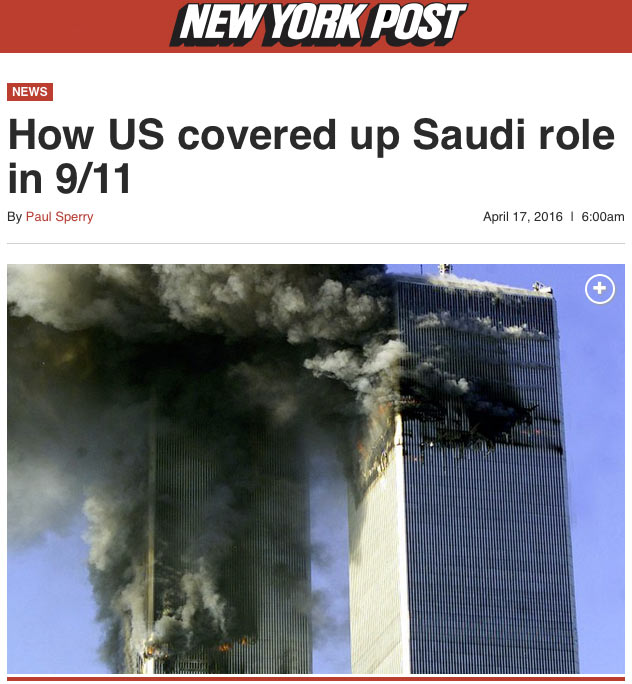 Among the numerous views held by those espousing “9/11 truth,” one central idea remains the same: The United States government is complicit in the September 11, 2001 terror attacks.

An article in the New York Post this week, boldly titled “How US covered up Saudi role in 9/11,” details how the highest levels of the US government not only helped conceal Saudi involvement but assisted the perpetrators in escaping the country. 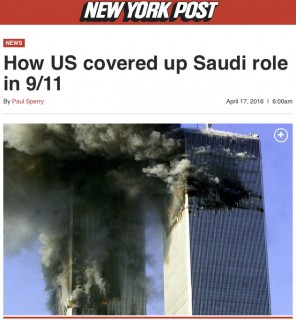 “The kingdom’s involvement was deliberately covered up at the highest levels of our government. And the coverup goes beyond locking up 28 pages of the Saudi report in a vault in the US Capitol basement,” Paul Sperry writes. “Investigations were throttled. Co-conspirators were let off the hook.”

Everyone from Join Terrorism Task Force members to FBI agents and Virginia law enforcement say that despite evidence leading to the Saudi Embassy in Washington, investigations were derailed repeatedly by higher ups.

“Those sources say the pages missing from the 9/11 congressional inquiry report — which comprise the entire final chapter dealing with ‘foreign support for the September 11 hijackers’ — details ‘incontrovertible evidence’ gathered from both CIA and FBI case files of official Saudi assistance for at least two of the Saudi hijackers who settled in San Diego.”

One name specifically, that of Saudi Ambassador Prince Bandar, commonly known as “Bandar Bush” due to his longtime relationship with the president, came up frequently during investigations.

Upon learning of the agent’s knowledge, State Department officials responded not by detaining Bandar, but by providing him with round-the-clock protection.

“An investigator who worked with the JTTF in Washington complained that instead of investigating Bandar, the US government protected him — literally,” the article says. “He said the State Department assigned a security detail to help guard Bandar not only at the embassy, but also at his McLean, Va., mansion.”

Former FBI agent John Guandolo, a Washington field agent who investigated Bandar following 9/11, says the Saudi should have undoubtedly been treated as a suspect.

“The Saudi ambassador funded two of the 9/11 hijackers through a third party,” Guandolo said. “He should be treated as a terrorist suspect, as should other members of the Saudi elite class who the US government knows are currently funding the global jihad.”

The article goes on to state that just two days after the attack, Bandar visited the White House to enjoy several cigars with President Bush before being granted safe passage out of the country with other Saudis.

“After he met on Sept. 13, 2001, with President Bush in the White House, where the two old family friends shared cigars on the Truman Balcony, the FBI evacuated dozens of Saudi officials from multiple cities, including at least one Osama bin Laden family member on the terror watch list,” Sperry says. “Instead of interrogating the Saudis, FBI agents acted as security escorts for them, even though it was known at the time that 15 of the 19 hijackers were Saudi citizens.” 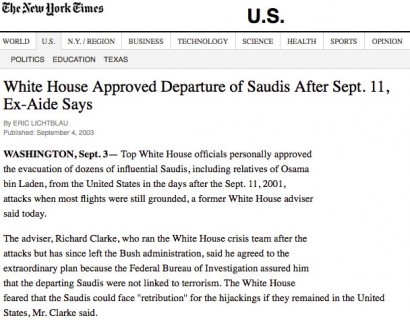 Then-White House adviser Richard Clarke also stated in 2003 that he aided the Saudis escape after being assured by FBI agents that they had been cleared of wrongdoing.

“The adviser, Richard Clarke, who ran the White House crisis team after the attacks but has since left the Bush administration, said he agreed to the extraordinary plan because the Federal Bureau of Investigation assured him that the departing Saudis were not linked to terrorism,” Times writer Eric Lichtblau stated.

In response to growing knowledge of the Saudi’s role, the Islamic kingdom has threatened to “sell up to $750 billion in treasury securities and other assets in the United States” if legislation backing the release of the 28 pages is passed.

“Adel al-Jubeir, the Saudi foreign minister, delivered the kingdom’s message personally last month during a trip to Washington, telling lawmakers that Saudi Arabia would be forced to sell up to $750 billion in treasury securities and other assets in the United States before they could be in danger of being frozen by American courts,” writes The New York Times.

Although such information is devastating to the US, Saudi Arabia and the “official story” of September 11, much of it has been public since the years following the attack.

Largely ignored by the press is the countless other government officials who also say they experienced similar treatment when trying to investigate America’s largest ever terror attack.

Former NSA senior executive Thomas Drake, who blew the whistle on domestic surveillance during the Bush presidency, has commented repeatedly on NSA intelligence that would have “undoubtedly” stopped 9/11.

“I had no intention of joining the ranks of ‘whistle blowers,’” Shaffer said in 2009. “When I made my disclosure to the 9/11 commission regarding the existence of a pre 9/11 offensive counter-terrorism operation that had discovered several of the 9/11 terrorists a full year before the 9/11 attacks my intention was to simply tell the truth, and fulfill my oath of office.”

Shaffer also joined the Alex Jones Show well over one year ago to discuss the Saudi’s role in 9/11 and the 28 pages.

Former FBI wiretap translator Sibel Edmonds, who had access to top-secret communications, also stated in 2004 that the FBI had detailed 9/11 foreknowledge that specifically mentioned a terrorist attack involving airplanes.

“We should have had orange or red-type of alert in June or July of 2001. There was that much information available,” Edmonds said. “There was specific information about use of airplanes, that an attack was on the way two or three months beforehand and that several people were already in the country by May of 2001. They should’ve alerted the people to the threat we’re facing.”

The 28 pages are now so mainstream that presidential candidates are being forced to find a stance on the topic.

The first candidate to touch the subject was none other than Republican frontrunner Donald J. Trump, who earlier this year pointed the finger at Saudi Arabia.

“But it wasn’t the Iraqis, you will find out who really knocked down the World Trade Center,” Trump said at a campaign event in Bluffton, South Carolina. “Because they have papers in there that are very secret, you may find it’s the Saudis, okay? But you will find out.”

Other candidates have been less forward.

Democrat candidate Hillary Clinton refused to say Monday whether she had even seen the 28 pages at all.

“I am not commenting,” she said.

Although Clinton has remained tight-lipped, her and fellow Democrat Bernie Sanders are backing legislation that would allow families of loved ones killed in the 9/11 attacks to sue the Saudi government.

“Obviously, we’ve got to make anyone who participates in or supports terrorism pay a price, and we also have to be aware of any consequences that might affect Americans, either military or civilian or our nation,” Clinton told ABC.

The Obama administration has threatened to veto the bill.

“It could put the United States and our taxpayers and our service members and our diplomats at significant risk if other countries were to adopt a similar law,” White House press secretary Josh Earnest told reporters Monday. “Given the long list of concerns I have expressed … it’s difficult to imagine a scenario in which the president would sign the bill as it’s currently drafted.”

Before dropping out, Republican Jeb Bush was confronted twice by Infowars reporters on the Saudi link.

Jeb again quipped during the second encounter, asking if the reporter could supply him with a copy.

Regardless of one’s exact theory on the details of 9/11, it’s time for Americans and people around the world to admit they were lied to.