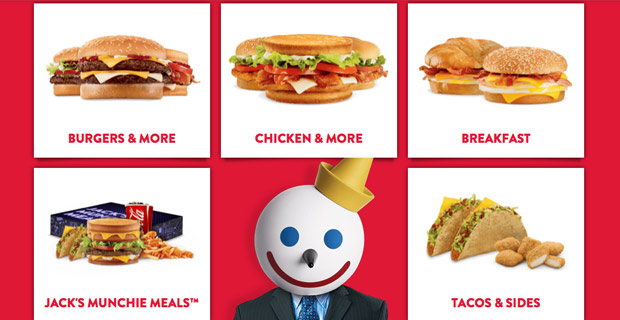 While claiming to provide an invaluable public service, all Jack-in-the-Box restaurants in San Antonio, Texas, are announcing they will now be accepting payment via EBT cards.

“This is a great program for those customers who need financial assistance to help them feed their families, especially for some seniors and those who cannot cook for themselves,” a spokesman for the fast food chain told local San Antonio news outlet KENS5.

Two USDA programs, the Supplemental Nutrition Assistance Program (SNAP) and the Temporary Assistance for Needy Families (TANF) program, allot a predetermined amount of monthly benefits for poor families in the form of “food stamps,” as they are colloquially referred to, via an “E.B.T.” (Electronic Benefits Transfer) card.

However, poverty-stricken Texans eligible for Lone Star TANF benefits, on the other hand, can now swing by the chain for a jumbo-sized Ultimate Cheeseburger combo, as Jack-in-the-Box is “rolling out technology that would allow all of its San Antonio locations to accept Lonestar, EBT, Cash Aid and TANF cards,” according to KENS5.

Since 2011, fast food chains across the nation have begun accepting federal aid money, wanting a cut of the multi-billion dollar cash cow with seemingly no regard for the nation’s budget or collective waistline. One out of four Americans are already receiving government food assistance, and with the current state of the economy, inflation and low wages, not to mention joblessness, the number of people receiving aid is expected to rise.

The recent surge of illegal immigrants also vastly increases the scope of the potential market to be tapped.

In April 2013, Judicial Watch came across documents “detailing how the U.S. Department of Agriculture (USDA) is working with the Mexican government to promote participation by illegal aliens in the U.S. food stamp program.”

The watchdog group discovered a “Spanish-language flyer provided to the Mexican Embassy by the USDA with a statement advising Mexicans in the U.S. that they do not need to declare their immigration status in order to receive financial assistance. Emphasized in bold and underlined, the statement reads, ‘You need not divulge information regarding your immigration status in seeking this benefit for your children.’”

When Yum! Brands – the owner of companies such as Taco Bell, KFC, Long John Silver’s and Pizza Hut – announced in 2011 they wanted all of their stores to begin accepting food stamps, they too hid behind a veneer of humanitarianism, claiming they merely wanted to accommodate “elderly, disabled and homeless people [who] have difficulty preparing meals.”

But Yum! efforts to get all 50 states in which their chains are located to accept food stamps ultimately fell flat after the USDA called into question allowing benefit purchases of that “quality of food.”

“For us to be indifferent to the quality of the food is just a serious mistake,” Kevin Concannon, Under Secretary for Food, Nutrition and Consumer Services at USDA, told Bloomberg News.

“We should promote access to healthy foods,” Concannon added.

Attempting to feed the elderly and more destitute is no doubt a noble undertaking, however, most people would agree that “food” from Jack-in-the-Box, a company which produces marketing campaigns targeting late-night stoners, is anything but healthy.

Indeed, just this year Jack-in-the-Box “food” was called into question after food blogger Vani Hari, otherwise known as the “Food Babe,” went after Subway for its practice of using the chemical azodicarbonamide, found in yoga mats, shoe rubber and synthetic leather, to produce a variety of its breads. Jack-in-the-Box breads also contain the chemical, though it is banned as a food additive in continents such as Europe and Australia.

And of course no Jack-in-the-Box critique is complete without a look back at the E. coli scare of the 1990s, in which more than 700 customers who consumed products from stores in California, Idaho, Washington and Nevada were sickened. The outbreak also led to the deaths of four children and left dozens suffering permanent kidney and brain damage. Following the detrimental setback, which almost saw the company go under, the chain absconded accountability, and relied on a tremendous amount of PR and reassurances to regain the trust of the American people.

Taking a cue from First Lady Michelle Obama’s Hunger Free Kids initiative, the USDA is currently spending at least $1.9 million looking at ways to “nudge” Americans on the government dole to make healthier food choices, even considering forcing fast-food companies to modify combo choices, but as it stands now, how do you feel about your tax dollars further being used to subsidize other people’s unhealthy eating habits?