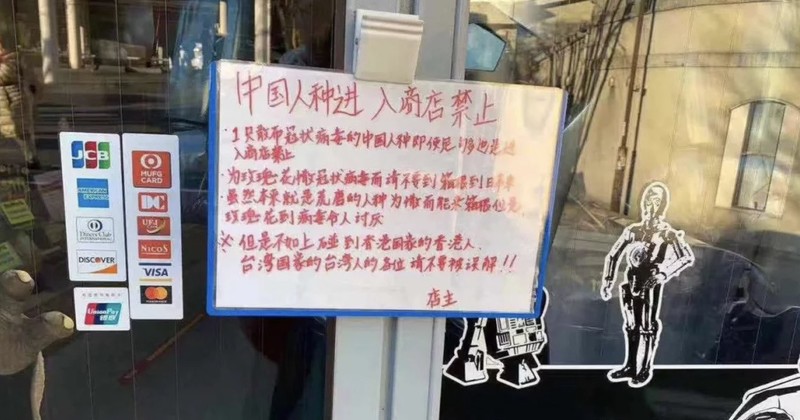 The mysterious new coronavirus now spreading around the globe prompted one shopkeeper in Japan to hang a sign outside his door announcing “no Chinese allowed.”

Reacting to hysteria about the virus, the shopkeeper in the mountain town of Hakone, a popular destination for Chinese tourists, posted the sign which reads, “No Chinese are allowed to enter the store…I do not want to spread the virus.”

“I want to protect myself from the virus and I don’t want Chinese people to enter the store,” the man told SCMP.

Despite being attacked on social media, the shopkeeper isn’t breaking any laws because there aren’t any against discrimination in Japan on the books.

The new coronavirus began spreading in the Chinese city of Wuhan from what authorities believe was a seafood market that “conducted illegal transactions of wild animals.”

It has since spread to other Chinese cities as well as globally, including cases in the U.S.

There have been at least 440 confirmed cases of the virus and nine people have died.

Authorities are advising people to stop traveling in an out of Wuhan and airports across the world are beginning to set up secure zones where arrivals from China are tested.

When asked about the coronavirus case in the U.S., President Trump said the situation was “totally under control.”

“We have it totally under control,” President Trump says after the CDC confirmed the first U.S. case of the coronavirus that has sickened hundreds of people in China. #Davos2020 https://t.co/QYmMpUcbFP pic.twitter.com/iuaQ1DikPB