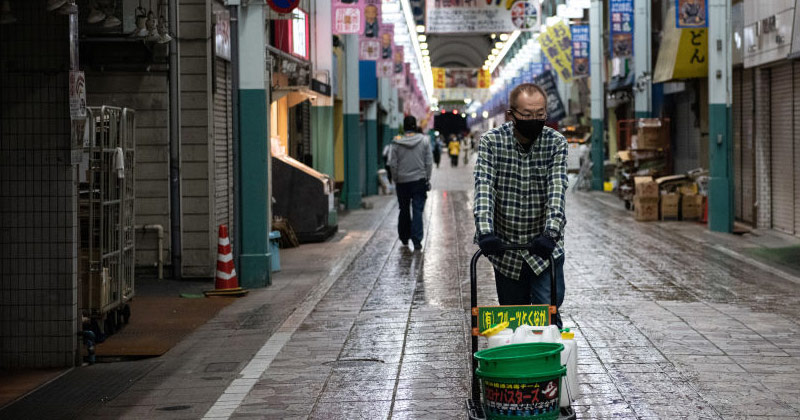 Japan saw an estimated 2,900 foreign travelers in April, down 99.9% from a year earlier, as COVID-19 travel restrictions and lockdowns left the once-booming tourism sector in a state of paralysis.

The drop in foreign visitors was the most significant percentage decline on record dating back to 1964, the Japan National Tourism Organization (JNTO) reported. It was the first time the monthly figure fell sub 10,000. The previous low for monthly foreign visitors was 17,543 set back in February 1964.

The reason for the sharp decline stems from the government’s restrictions on international travel following a surge in domestic virus cases and deaths. On April 3, entry restrictions for international travelers were applied to 100 countries, including China, the US, and Europe, resulting in a collapse of inbound travel that severely impacted the country’s tourism industry.

Before the pandemic, tourism in the country was increasing at healthy growth rates. Around 31.8 million people visited Japan in 2019, up 2.2% over the previous year. Japan had high aspirations to boost tourism to a record 40 million this year, but those estimates were crushed due to the now-postponed Tokyo Olympics that have been rescheduled for 2021.

Travel restrictions and shutdowns have found success in mitigating the spread of the virus, Prime Minister Shinzo Abe said on Thursday, adding that Japan could lift the state of emergency in Tokyo as early as next week, that is if virus infections can remain low. Emergencies were recently lifted in Osaka, Kyoto, and Hyogo because of a drop in confirmed cases.

Japan’s tourism industry is expected to remain in a slump throughout the year. The world’s third-largest economy dove into recession for the first time since 2015:

“The economy entered the coronavirus shock in a very weak position,” said Izumi Devalier, chief Japan economist at BofA, but “the real big ugly stuff is going to happen in the April, June print. It’s going to be three-quarters of very negative growth.”

Abe, like other world leaders, is quickly trying to reopen his crashed economy and simultaneously contain the pathogen’s spread. This difficult task could ignite into a second virus wave later this year.

Japan’s low rate of testing for the virus suggests the scope of the outbreak is still yet to be known.